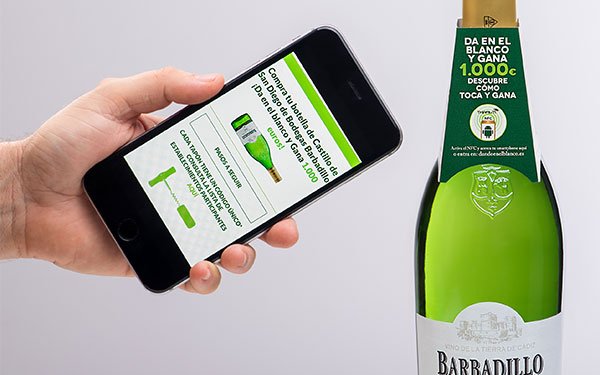 Wine bottles are getting connected.

The winemaker Barbadillo is adding NFC (Near Field Communication) tags to 126,000 bottles, portrayed by the company as the largest global deployment of NFC tags in the wine and spirts industry.

Other connected bottle programs also have been deployed. For example, Absolut and its agency SharpEnd last year connected 40,000 bottles of Malibu rum with NFC tags, as I wrote about here at the time (Malibu Rum Launches Connected Bottles To Deliver Consumer Content).

The connected bottles in Spain are being sold through 15 major supermarket chains.

Through a customized NFC-enabled neck collar, consumers are instructed to tap the bottles with their smartphone, where they learn about the promotion, which offers the chance to win one of 12 prizes of $1,200 each.

After purchasing and opening a bottle, they get a code on the cork, which then enter via mobile and receive instant notification if they won.

Consumers also will learn of the promotion through television, online and outdoor advertising, according the company.

The NFC tags, created by the packaging company Thin Film Electronics, integrate with the wine packaging and don’t require a mobile app.

Each of the 126,000 tags are uniquely identifiable and connect to a cloud-based platform.

There will be plenty of opportunity for consumer to tap bottles, since Castillo de San Diego is the most widely sold wine in Spain.