Monkey Shoulder Takes To The Road For Promotion 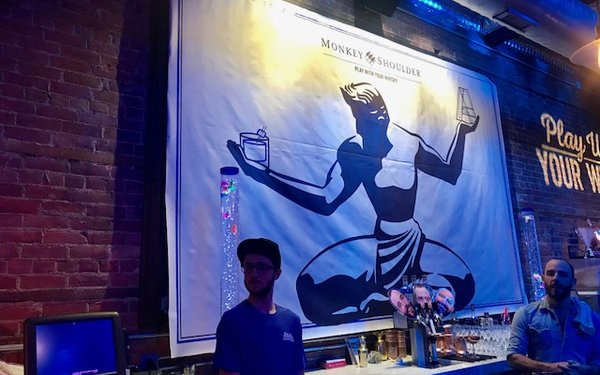 As part of the nationwide Distortion Tour running through 2018, NYC-based Attaboy is bringing its world-famous bartenders to various venues, including Detroit’s Wright & Company, to share four specialty cocktails featuring the scotch whisky. Other stops on the tour include Denver, New York, and Miami.

“Monkey Shoulder is made for mixing, so it only makes sense that we put a spin on classic cocktail moments with the Distortion Tour,” said Monkey Shoulder Ambassador Vance Henderson. “These bars are masters of their craft, and we want to showcase their talent by pushing the limits of what’s possible.”

Henderson was on hand in Detroit to periodically pump up the crowd.

Besides Detroit, NYC’s Attaboy participated in the dates in Denver (May 20) and will be on hand in Miami (Nov. 12.) London’s famous American Bar at the Savoy will lend its talents to a one-night-only stop in Brooklyn on June 12.

Herbs & Rye, Las Vegas, will pair the best of modern imbibing with subtle touches of theatrical fun and will feature the exclusive U.S. launch of the Monkey Shoulder Smoke Injector, the newest bartender tool that can top any cocktail with a cloud of captivating smoke. They will be featured in Nashivlle June 25 and San Diego on June 27.

Finally, in the West Village, NYC’s Employees Onlyis going totally Tiki, exchanging aprons for grass skirts This pop-up will take the bar’s classical artistic vibes and strike it through with a Polynesian flair unlike any other in Austin, Texas (Sept. 11) and Chicago (Oct. 22).