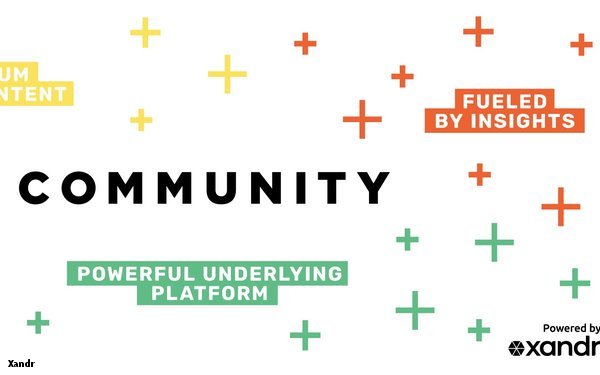 The new video ad marketplace will be called “Community” and will be cross-platform, encompassing OTT, CTV, digital, and mobile.

The company says the marketplace is a “first step toward the future convergence of linear TV and digital.” The goal with Community is to enable “advertisers to reach their audiences at scale in a brand-safe, privacy-protected, premium video environment.”

Xandr’s partners in the Community marketplace will include the AT&T-owned brands, such as the WarnerMedia properties. It will also include Otter Media and the streaming services DirecTV Now and AT&T WatchTV. Third parties participating in the marketplace include Vice Media, Newsy and Hearst Magazines, as well as the streaming video services Philo, Tubi, and Xumo.

Community will be layered with Xandr’s data stack and audience segments, which leverage AT&T’s first-party data. Marketers will be able to use a dashboard to measure the effectiveness of their campaigns.

It will also be addressable, incorporating Xandr’s cross-screen addressable solution into its offering. Marketers can use that solution to identify their target audience and key households in which they can serve more relevant messages, across platforms.

Addressable will be a recurring theme at the event, with Xandr also rolling out an enhanced addressable TV offering designed to complement the traditional TV buys made during upfront season.

For starters, the company is overhauling its advanced TV solution to more efficiently boost incremental reach, and to take advantage of cross-screen viewing behavior.

The company will be expanding its VOD offerings, with plans to continue adding to the pool of available VOD inventory.

On the consumer side, the company hopes to bolster incremental reach by limiting the number of times a household sees the same brand message, while also leveraging its data pool to find “light TV” viewers who may not have seen a particular ad at all.

The launch of the Community marketplace, along with the company’s enhanced addressable offering, are the biggest moves yet by Xandr, which only officially launched eight months ago.