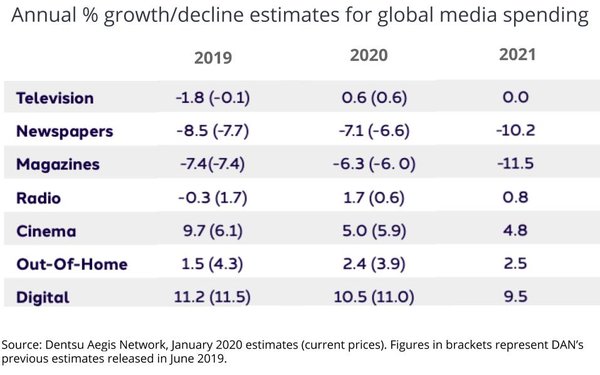 Dentsu Aegis Network has issued a new 2020 ad-spend forecast predicting 3.8% growth in the U.S. and 3.9% globally, due in part to the U.S. elections, the Tokyo Olympics and what the company termed a “resurgent NFL.”

The predicted 2020 growth will translate to an additional $23.3 billion ad dollars globally and $8.5 billion in the U.S.

Total global spending this year will amount to $615.4 billion, per the forecast.

Digital is expected to grow 11.2%, fueled by massive spending in mobile.

DAN predicts that three-quarters of digital ad dollars will be spent on mobile in 2020. Within the mobile space, growth will be driven by display and search, due to the increasing amount of mobile commerce.

Total TV spending will increase 1.3% in the U.S., and OTT services will have the highest increase in spend and growth potential, as new players like Peacock and Quibi enter the market. Peacock, for example, will launch in April in nearly 23 million ad-supported homes and will be in 30-35 million homes by the end of 2023.

Addressable TV advertising has grown rapidly, reaching $2 billion in 2019 in the U.S. -- an increase of about 30%. It now accounts for between 1 and 2% of the total linear TV advertising market and is expected to account for 10% by 2023 locally.

Overall radio is forecast to grow 2.3% in the U.S. Network audio spend is up 6%, largely due to increased spending from CPG, Insurance, Pharma, and less traditional companies such as Amazon, Audible and Zillow.

Digital audio (12% of total radio spend) is up with strong demand for podcast advertising.

Out-of-home is seeing a boost as well, thanks to digital. It is expected to grow 2.4%.

Digital out-of-home, thanks to VR and facial recognition, is expected to make up around 30% of the mix.

And print (newspapers and magazines) are expected to see declines of -8% in the U.S.