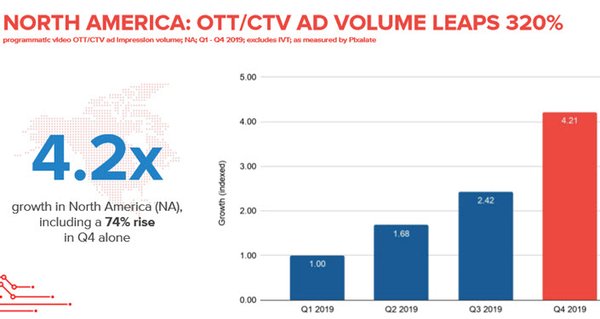 While the accelerating growth of over-the-top/connected TV programmatic advertising is hardly news, the magnitude of growth is notable indeed.

Programmatic OTT/CTV ad transactions leapt by 330% on a global basis last year, meaning inventory grew by a factor of 4.3 times, according to a just-released “Ad Supply Trends Report” for 2019, from Pixalate, the global ad fraud intelligence and marketing compliance platform.

In North America, the transactions increased by a similarly impressive 320%, or 4.2 times inventory growth — including 74% growth in Q4 alone.

“Every major region in the world saw at least 175% growth in 2019, as OTT/CTV took center stage in advertising,” Pixalate’s CEO, Jalal Nasir, noted to Advanced TV Insider. “It’s going to be the biggest advertising topic in 2020.”

The data come from the company’s analysis of billions of programmatic ad impressions (invalid traffic excluded) across more than 75 million OTT/CTV devices, collected between first quarter 2018 and fourth quarter 2019.

OTT/CTV apps that support programmatic video advertising have also been multiplying. In fact, those increased by 232% over the last 18 months.

“Almost anyone can make an OTT/CTV app, and this spike in available supply sources is only the beginning,” says Nasir.

While Roku devices still heavily dominated, with a 59% ad market share, that represented a 12% decrease versus 2018, according to Pixalate’s data.

“Last year, there was a huge increase in other types of devices for watching internet-enabled TV,” notes Nasir.

Overall, the report underscores the complexity of OTT/CTV.

While the major app-store sources in the U.S. mobile app space come down to Apple and Google, there are 20-plus major OTT/CTV app stores with hundreds or thousands of apps.

“That speaks to the challenges advertisers face when ramping up efforts in this environment,” says Nasir — who takes the opportunity to point out that this complexity, combined with the highest CPMs seen in programmatic to date, make this arena “ripe” for ad-fraud attacks.

Not surprisingly, Nasir predicts that as more and more publishers enter the OTT/CTV ecosystem, “the brands that properly validate their supply partners are the ones that will win.” He adds that the currently limited options for detecting and preventing OTT/CTV ad fraud “makes it even harder for advertisers.”

(For more on ad fraud in this arena, see last week’s ATV Insider.)