What Consumers Expect From The New Ad 'Value' Exchange 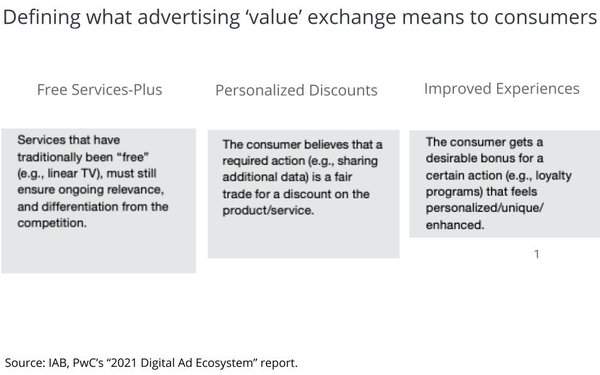 The traditional advertising value exchange -- trading free, ad-supported content for consumer attention -- is no longer good enough for many, if not most consumers, and the ad industry is in need of a reset based on three more refined models.

That's the conclusion of a new report conducted by PwC for the Interactive Advertising Bureau.

The report -- "2021 Digital Ad Ecosystem," which is being released this morning as part of the kickoff of this week's IAB Annual Leadership Meeting -- also addresses other looming changes for digital advertising buyers and sellers: the rising importance of "walled gardens" as third-party cookies wither, increased role for "retail media" as digital shopping grows in importance, an acceleration of the shift to "outcome"-based measurement, and an overarching need to combat misinformation from digital media.

But none seem as fundamental as the shift in consumer mindset about why they should even be exposed to -- much less pay attention to --  advertising in a world of digital media in which they often are targeted with their own personal data.

The report identifies a new Holy Trinity of "value" exchange models that digital advertisers and suppliers need to be mindful of, including:

“To put it bluntly, the old value exchanges just aren’t enough," IAB Senior Vice President of Research & Analytics Sue Hogan notes in a statement included with the release of the report, adding: "The model is broken. Publishers and media companies have to reimagine reciprocity or risk the flight of consumers to competitors."