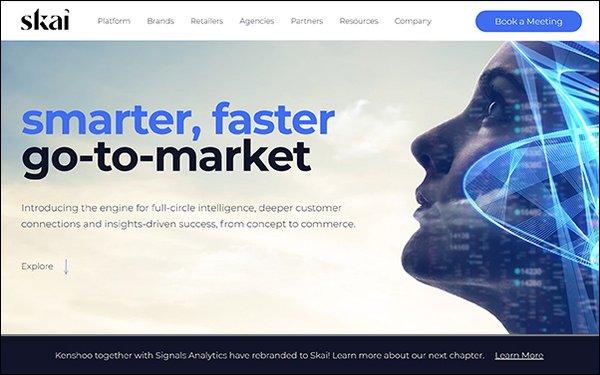 Kenshoo on Tuesday announced a rebrand to Skai on the heels of massive investments in ecommerce, retail and data intelligence during the past few years, as well as the acquisition of Signal Analytics, focused on analytics powered by artificial intelligence.

Ecommerce and direct-to-consumer (D2C) business models have become the primary storefront for brand and consumer interaction, with some estimating that five years of progress magically happened in just two quarters in 2020.

Skai is an acronym for Signal Analytics, which Kenshoo acquired earlier this year. The “k” is for Kenshoo, and “a” and “I” stand for actionable intelligence. “Skai began as an internal code name,” said Margo Kahnrose, CMO of Skai. “It also began as a metaphor for what we are trying to convey, giving the brands a bird’s eye view.”

Skai will also focus on the big picture, connecting with customers and bringing products to the correct marketing channel using the perfect data for companies like PepsiCo, Estee Lauder, reckitt, Draft Kings, and Backcountry, LG, among others.

“We will sunset the Kenshoo name in the coming months,” Kahnrose said. “Most will happen immediately, but some references might remain throughout the summer. The same goes for Signal Analytics.”

Under Skai, an AI-powered suite of data analytics products including market intelligence, omnichannel media activation, and testing and measurement tools all share a foundation in data that works together to provide incremental lift. Products for teams now include strategy and planning, consumer and insights, chief marketing officers and data analytics. The products are offered under marketing intelligence.

As brands face a future without cookies or tracking IDs, Skai’s approach to data enables them to intelligently navigate changing privacy regulations while rapidly bringing products to market.