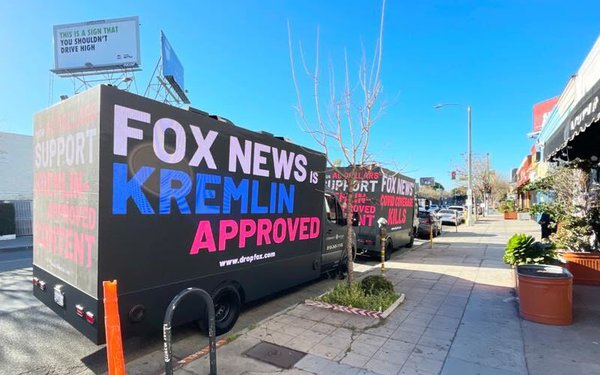 Fox News Channel has had a number of slogans since its inception -- from "The Most Powerful Name In New" to "Fair and Balanced" to "Standing Up For What's Right" -- but media watchdog group Media Matters for America will begin promoting a new one on outdoor media Wednesday: "Fox News Is Kremlin Approved."

The slogan, which will be mounted on mobile billboards that will circle the Fox Studio lot in Los Angeles, is one of four that will be rotating through the campaign.

The others include "Putin Loves Fox," "Fox News' COVID Coverage Kills," and one that targets people in the ad industry explicitly, "Your Ad Dollars Support Kremlin-Approved Content."

"The billboard warnings show how Fox traps advertisers in a losing battle with the misinformation and bigotry of their content, and encourages partners to be extremely cautious about getting their brand involved with the company," Media Matters said in a statement, adding, "Financially supporting Fox News’ Kremlin-approved propaganda, deadly medical misinformation, bigotry, and hate is guaranteed to damage the reputation of any brand or shareholder."