Streaming Climbs To Near 30% Share Of All Total Day Viewing 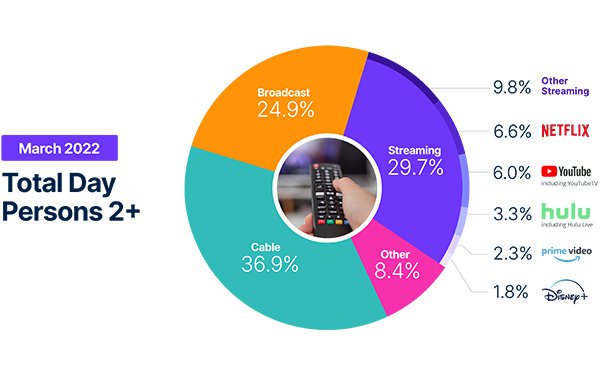 Streaming TV viewing in March had a nearly 30% share (29.7%) of all total day TV viewing for persons two years and older, according to Nielsen’s "The Gauge" -- its largest share of viewing since Nielsen started up the measure in May 2021.

All this occurred while there was an overall 4.2% drop overall in total TV viewing versus February 2022.

Streaming was up one share percentage point from February -- although Nielsen says actual TV time spent for streaming dropped 0.7%.

Broadcast's share of viewing sank 1.1 share points to 24.9% (from 26.0% in February). This was largely due to comparisons to the February period, which had Winter Olympics viewing.

Cable networks' share still led all total day viewing for persons ages two and up at 36.9% -- up from 35.4%. When Nielsen started up The Gauge, about a year ago, cable had a 39% share.

Nielsen says strong viewing on cable TV news network coverage of the Russia-Ukraine war was the reason. Cable news viewing was up 14% from February -- representing 21% of cable’s total viewing share.

Looking at individual streamers, Netflix increased its share to 6.6% (up from 6.45%).

Amazon Prime Video remained the same at 2.3%, while Disney+ inched up one share percentage point to 1.8%.