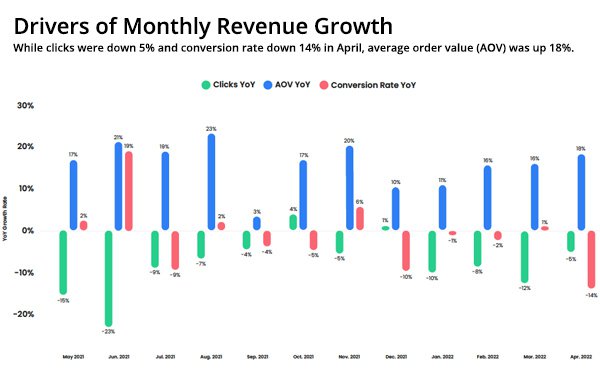 The average order value for affiliate sales rose 16% in April, according to Partnerize, a company that supports partner automation for brands.

The good news is that the percentage of revenue from new customers was 45%, up 9% YoY. Mobile revenue rose 19% in April, and represented 36% of all conversions.

Publisher partner applications fell in April 19% YoY, after surging during the 12-month period in 2020. In Q4 2021, partner sign-ups remained steady, although YoY growth seemingly slowed due to the significant growth experienced in the prior year.

Travel experienced a click growth rate of 9% and gross revenue YoY growth rate of 71% -- one of the highest segments. Clothing and apparel rose 15% and 30%, respectively. Other verticals tracked mostly fell.

All data represents YoY growth or declines for the end of April 2022.