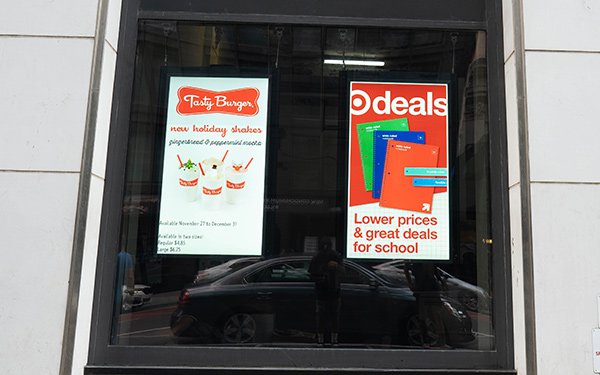 Smartify Media, a digital out-of-home (DOOH) and in-retail digital advertising platform, launched a program called Small Business Revenue+ that enables businesses such as bodegas, liquor stores and gyms to gain incremental and recurring revenue from digital advertising at no cost to the stores and with no management time required.

The program, which the company says converts storefronts into a “media experience,” has been running in beta across 52 stores. It not only supports retailers, but commercial property owners generate revenue from vacant storefronts. A Los Angeles real estate company also adopted the technology.

Matthew Lavi, a real-estate expert in Los Angeles, uses two of Smartify’s media television screens across its businesses, and each plays host to ads as customers walk in and drive by.

“The benefits are really financial,” Lavi said. “We are making use of our ‘real estate’ and making money. Also, the customers seem to like the ads and visuals. Makes the space look more appealing.”

Lavi said his real estate company makes money off the ads without using extra resources or additional capital. The screens have become a “great resource,” he said, especially for small businesses like his.

Small businesses continue to struggle to reach pre-pandemic revenue levels as they face diminished foot traffic and rising costs due to inflation.

Smartify launched its business in 2020 during the height of COVID-19 in combination with Samsung C&T, one of the main parent divisions of Samsung Group, manages the ad sales and splits the revenue with the property or store owner.

It also provides the retail space with a double-sided 55-inch Samsung digital screens, which the company installs and then integrates with its media network. Businesses choose the ads they want or don’t want, and can use the screens to display their own content too, such as information on sales promotions.

The company added a programmatic channel on top of Samsung’s CMS platform — MagicINFO — to pull in ads, explains Joe Kunigonis, CEO at Smartify Media. The ad server reaches out to other programmatic ad servers in real time across the Smartify media network, which will allow it to pull in multiple exchanges.

“We started a beta test in Boston, and it was very successful,” he said. “We then expanded into New York, L.A., Chicago, Tampa Bay, Miami, Atlanta, and San Francisco.”

The company also is building a “hyper-local” ad portal that will allow small businesses to transact in a way that is similar to how they transact programmatically.

“We don’t view ourselves as an ad network, but rather a hybrid -- which we call the Media Experience Platform -- because it merges relevant content to on-premise messaging,” he said.