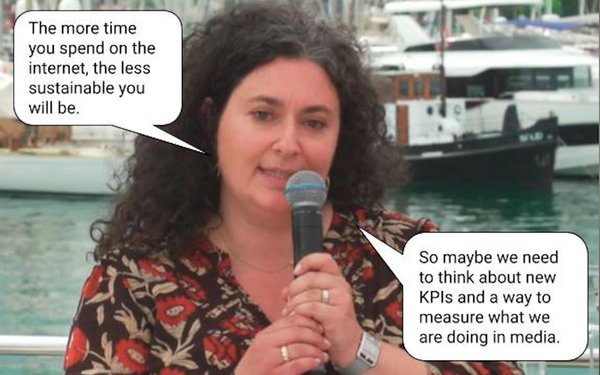 This is one of those Mobile Insiders that is much bigger than "mobile" and has consequences for the entire media ecosystem, but I'm writing about it here, because it will definitely impact how carbon-neutral-minded marketers use the medium in the future.

The issue came up during a panel on the role that advertising and media should be playing in not just offsetting, but actually reducing, carbon emissions in the world, sponsored by OpenX Wednesday during this week's Cannes Lions festival.

All the speakers had good ideas, which I've reported on or written about elsewhere. But I saved some of Nestlé Media Lead Laure-Sarah Labrunie's remarks for this column, because they merit special attention.

Labrunie shared results of some important research Nestle conducted with its agency Publicis, as well as a French startup helping it to estimate the carbon impact of its advertising campaigns and media buys. Nothing new there, right?

What was interesting was the way Labrunie A/B tested two variants of campaigns for the Nescafe brand: one that simply adapted its conventional TV spots to digital media, and another that downgraded the quality of their bandwidth via digital compression, as well as their audio, using mono instead of stereo sound.

Labrunie described these as simple "hygienic" fixes that reduced the carbon footprint of the ads by 50% without impacting campaign performance.

"We measured our media KPI. And guess what? They were exactly the same. So no difference in terms of media KPI," Labrunie shared, adding that she also conducted brand-equity research vis a vis Publicis' Epsilon unit and again, found zero impact between the the traditional and the carbon-emissions-reducing versions of the campaign.

“When it is digital and when it is on your mobile, maybe you don’t need to add to have a stereo sound -- you just need to have mono sound," she remarked, likely sending shivers down the spines of some mobile marketers -- or media suppliers -- who read this column.

I won't speculate on what reducing the quality of bandwidth, sound and other hygienic elements will do to the mobile media experience, but I'm all in favor of the ad industry doing everything it can to reduce carbon emissions on this planet.

But it was Labrunie's second point that got me really thinking about a big -- and arguably long overdue -- change for advertising and media that has nothing to do with creative, per se.

It's about one of the most fundamental "KPIs" (key performance indicators) that advertisers and agencies use to evaluate the success of ads and media buys: the time consumers spend with them.

Labrunie said marketers have been using time spent as a vital KPI for decades on the assumption that it builds brand equity and lifts sales -- but actually, there's no research to prove this assumption.

"In fact, we really don’t know it," she said, adding that in terms of the environmental impact, the more time consumers spend on digital media, the more carbon that gets emitted.

"The more time you spend on the internet, the less sustainable you will be," she said, adding, "So maybe we need to think about new KPIs and a way to measure what we are doing in media to transform our industry."

Needless to say, I totally agree with Labrunie's logic, but it also seems antithetical for an industry premised on owning people's attention in an increasingly fragmented and cluttered media environment.

And of course, the media companies that get people hooked on spending time with them, generate the greatest share of market and profits.

Of course, there's another reason why advertisers might want to develop a KPI based on less time spent.

Aside from the carbon benefit, it could very well improve consumers' overall experience with advertising and media, while giving them more time to spend doing things in the real world -- like eating chocolate.