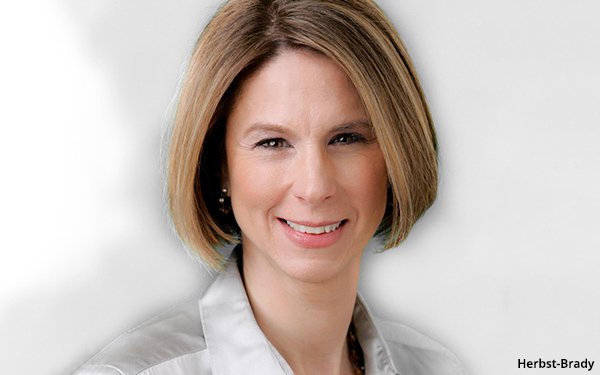 Herbst-Brady takes responsibility for all revenue-generating aspects of Yahoo in her new role, as well as the company’s global go-to market strategy and expansions for any revenue-related functions. In addition, she will head sales, driving revenue through Yahoo’s consumer and business-to-business product offerings.

“The plan is to streamline the global organization to make Yahoo really easy to work with,” Herbst-Brady said. “No one wants to understand your plumbing. They just want to show up and get what they need.”

This is separate from delivering on the key performance indicators (KPI) that brands expect to drive the best yield. Transparency and brand safety are part of it.

When asked to describe the best piece of business advice learned throughout her career, Herbst-Brady cited two. “I was at Fox and honing the craft of negotiation,” she said. “Dan Greenblatt said to me: ‘Elizabeth, you have two ears and one mouth, which means you should listen twice as much as you talk’.”

Jeff Lucas, while working at Viacom, also left an impression on Herbst-Brady.

She said: “it’s not just important to know what to do in a specific situation, but it’s important to understand how people feel when they do it with you.”

Herbst-Brady grew up in a professional household. Her dad was a doctor and mom was a math teacher. She didn’t know anyone in marketing and attended a small private school in Massachusetts called Shady Hill. Although her parents did not allow much TV watching in the home, she loved television. “I was allowed to read,” she said.

So she would read the TV Guide from cover to cover, to get the news and updates on shows and people. After graduating as a psychology major, she arrived in New York at an employment agency. She told them about her love for TV and movies. The employment agency sent her to CBS, where she landed three separate job interviews for various positions, including someone to process all the media orders.

The rest is history. “I was very lucky,” she said. “I loved the product. It all comes down to three things — be curious, accountable, and be grateful.”

Herbst-Brady initially joined Yahoo as Head of U.S. Field Sales from Snap, where she served as head of global strategic partnerships.

Throughout her career, she served as EVP of ad-sales strategy and product at Viacom, and major roles at Magna Global, Twentieth Television, Starcom Worldwide, Universal Television, Fox Inc., Tribune Entertainment, and CBS.

Yahoo continues to do well under the parent company Apollo Global Management, opening new opportunities to work with a variety of companies. Herbst-Brady said more than 200 advertisers now work with the company using its demand-side platform (DSP), spending at least $1 million annually -- a metric the company uses to determine the engagement of brands.

Last week, Yahoo announced a partnership with Lowe’s One Roof Media Network as the primary demand-side platform (DSP) powering its off-site media business—all inventory outside of Lowes.com and the Lowe’s app.

The Lowe’s One Roof Media Network provides an extensive portfolio of omnichannel advertising services designed to put brands at the forefront of the home-lifestyle movement.

LORMN is the latest partner to leverage Yahoo Member Connect – a new solution suite built to power media networks for brands. We will also integrate our DSP and sustainable identity solution, Yahoo ConnectID, with Lowe’s One Roof Media Network.

One of the more interesting partnerships announced earlier Monday is a deal with DIRECTV Advertising, which will include set-top-box (STB) data, backed by market-leading privacy protection protocols.