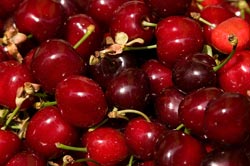 Cheribundi is partnering with more than 60 college and professional sports teams to provide tart cherry juice to their athletes.

The Boulder, Colo.-based beverage is using a guerilla marketing plan to get the word out about the benefits of the tangy juice.

Fans of Cheribundi have called it a secret weapon in the competitive and endurance sports worlds. Athletes at the recent summer Olympics in London reported drinking it to bounce back after heavy workouts and medal competitions.

Besides the endorsements, marketing also includes event sampling at rock'n roll marathons and various triathlons all over the country throughout the year. They also do hundreds of demos in various retailers.

As part of a University of Colorado sponsorship, there will be large billboards on their basketball and football stadiums and they’ll be demoing the juice at tailgate parties.

Consumers are looking for and need a natural anti-inflammatory, said Cheribundi CEO Brian Ross, who previously founded Oregon Chai and was also the VP of business development at IZZE beverage company.

“The benefits of tart cherry juice are real and Cheribundi tastes great, and this combination creates a great opportunity to reach consumers who have an unmet need," Ross tells Marketing Daily. "Oregon Chai and Izze were both new and exciting and delicious, but there were no specific health benefits attached. What is different here is that not only do we have great taste, but we have amazing health benefits to offer."

Studies have shown that tangy Montmorency cherries, the primary ingredient in Cheribundi, can reduce muscle and joint pain after intense exercise. It’s become part of a well-stocked training toolkit for pro and college athletes, as well as amateur runners, cyclists, triathletes and exercise enthusiasts.

The juice is reported to have anti-inflammatory and antioxidant properties, according to Malachy McHugh, director of research at the Nicholas Institute of Sports Medicine and Athletic Trauma at Lenox Hill Hospital in Manhattan.

The product is fresh-pressed at a plant in Geneva, N.Y., is distributed in nearly 4,000 groceries and markets nationwide, including Whole Foods Markets and Wegmans.