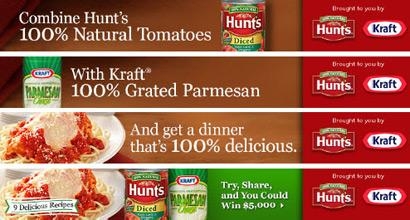 In a rare, ongoing partnership between two major food makers, ConAgra Food's Ro*Tel tomatoes and Kraft Foods' Velveeta cheese have been successfully co-marketed, through a "Famous Queso Dip" and other recipes made with the two brands, for a decade.

Now, the companies are not only rolling out the latest co-campaign for those brands, but building on their relationship with two new partnerships: one between ConAgra's Hunt's tomatoes and Kraft 100% Grated Parmesan Cheese; the other between ConAgra's Swiss Miss and Kraft's Jet-Puffed Mallow Bits.

The Ro*Tel/Velveeta relationship began 10 years ago with more typical joint in-store displays and promotions, and evolved into a fully integrated marketing partnership starting about six years ago — in which the two separately owned brands actually share portions of their advertising and promotions communications budgets, and collaborate on creative decision-making.

The latest cooperative Ro*Tel/Velveeta marketing initiative, running from September through February 2014, is a 360-degree "Queso for All" campaign.

The campaign aims to build awareness of the Queso Dip and sales for the two brands in markets beyond their strongest markets in Texas and the South Central region of the U.S., reports Jonathan Schaefer, brand director for Ro*Tel. (The campaign's elements declare the brands' "mission to cover the nation in queso," and "bring the country together, one bowl of queso at a time.")

The campaign includes a sampling tour at tailgating events at football games featuring top rivalry college teams, as well as sampling/dip-making demo events outside of grocery stores in target markets around the country. The brands are employing a "Quesobago" RV with two enthusiastic "Queso Queen" ambassadors on board.

The "Queso Queens" are also featured in TV spots showing their adventures as they drive the RV around the country to bring queso to all.

Beyond airing on television, those spots can be viewed on the brands' joint, dedicated Web site, QuesoforAll.com — which also features the "Famous Queso Dip" recipe (with easy social sharing function); a map and details to follow the stops of the Quesobago tour; and embedded feeds showing the latest queso-related posts on Ro*Tel's Facebook page (currently showing more than 69,000 "likes") and tweets on Velveeta @EatLiquidGold (more than 7,000 followers). The campaign's official hashtag is #quesoforall.

The site also features a sweepstakes. The winner will get a fully catered, at-home "Quesobago Bash" for 10 on "football's biggest day" (Feb. 2, 2014...which is, of course, Super Bowl Sunday).

The brands are promoting the sweeps and the tour, with links to the QuesoforAll site, on their respective social media presences. Other campaign elements include joint in-store and shopper-marketing promotions and FSIs.

The longevity and continuing expansion over the years of the Ro*Tel/Velveeta queso partnership testify to its success, points out Schaefer. "Obviously, we wouldn't still be doing this if both brands weren't gaining consumers and sales," he says. While he declines to share sales specifics from the partnership, he notes that the Ro*Tel brand as a whole has seen its usage penetration about double over the past 10 years.

Schaefer describes the relationship between the two brands as "very strong." Every aspect of the co-marketing campaigns is agreed upon, ensuring that all strategies and efforts are mutually beneficial, he stresses.

At Kraft, Richard Bode, brand manager for Velveeta and Kraft Grated Parmesan Cheese, likewise confirms that the complementary nature of Velveeta and Ro*Tel — and the increased media spending and reach to consumers that's enabled by their pooling of budget monies — have increased sales for both brands.

Bode adds that the ongoing relationship with ConAgra has in addition benefitted Velveeta's sales by enabling the brand to align its marketing communication closely with its sales execution. "Over the years, this initiative has also become intuitive to our retail teams, and as a result, we are able to coordinate shopper marketing programs that provide the consumer with easy solutions for different meal occasions, while driving the basket for the retailer," he reports.

Given the Velveeta/Ro*Tel success, it's not surprising that similar partnerships between other Kraft and ConAgra brands are now being launched.

The Hunt's tomatoes and Kraft Parmesan cheese partnership is focused on campaigns designed to help make the weeknight dinner menu decision easier for busy moms (and dads), reports Timothy Nangle, brand director for Hunt’s. "The two brands both serve that 'What to have for dinner tonight?' needs state," he points out.

The brands began by developing a "Hunt's and Kraft Recipe Collection" — dinner recipes, ranging from traditional Italian fare to more adventurous dishes, that use both brands.

The partnership kicked off in January with initial efforts that included promotions on the brands' respective social media presences, followed by outreach to targeted bloggers in February and in-store promotions in March, according to Nangle.

This fall, a more ambitious campaign is underway. It starts with the paired-brand recipes being showcased on Hunts.com and the Kraft Parmesan area of KraftRecipes.com.

The grand prize is $5,000 to host your own party with the assistance of chef George Duran. The brands will also give away up to 10,000 Silicone vegetable steamers – the more sweeps entrants who share the recipes on Pinterest, Facebook or email, the more steamers will be given away (one for every two "shares.") Participants can see the number of steamers given away rise along with sharing activity, via an online "Share-O-Meter."

Sweeps entrants get a digital coupon for the products – and, according to Nangle, they will receive progressively higher-value coupons depending on the nature of their activities, like printing out, reviewing online or sharing one of the recipes.

Supporting media efforts – all digital and social for this campaign – are designed to reach the target audience during the 4-to-7 pm timeframe during which most dinner decisions are made, Nangle reports.

These include paid search and banner ads (shown above) and videos on sites that consumers turn to for dinner ideas during that weekday time window, as well as outreach through the brands' (or companies') well-established respective Facebook and Twitter accounts. The brands are also doing an outreach program to both general-market and Latino bloggers.

Other core elements include in-store displays with coupons and recipes, shopper marketing promotions and FSIs.

Dedicated, co-branded social presences and advertising in traditional media are likely to be employed down the road, once these two brands' partnership "matures," notes Nangle. Hunt's and Kraft Parmesan are hoping to "replicate" the results yielded by the Ro*Tel/Velveeta partnership over time, as this newer partnership "blossoms," he says.

Bode says that Kraft believes that the Kraft Parmesan/Hunt's partnership is, like the Velveeta/Ro*Tel relationship, a natural fit, which will help retailers and their customers with "easy, delicious ways to make dinner" and enable the two brands to "have strong in-store execution, as well as an efficient marketing campaign."

The displays will include tear-pads with a coupon and a hot cocoa cookie recipe featuring the two brands as key ingredients.