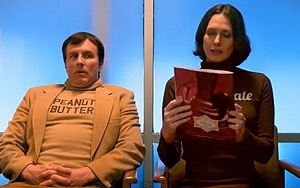 Butterfinger is going to the Super Bowl to grab America's attention for its first product launch in five years, and the largest launch in the brand's "90-ish"-year history: Butterfinger Peanut Butter Cups. The ad will also mark the first Super Bowl ad for any Nestle USA brand.

Actually, Butterfinger announced its plan to advertise the new PB cups during Super Bowl XLVIII back in October, but it has now released a teaser video that's generating anticipatory buzz.

Based on the teaser, the finished ad seen during the game will humorously take the brand into adult territory, supplanting its longtime, wise-kid mascot, Bart Simpson, with a scenario in which actors representing "Peanut Butter" and "Chocolate" go to couples therapy at "Happy Together Edible Couples Counseling."

An opening screen announces that "the relationship between chocolate and peanut butter is about to change," alluding (it turns out) to the new cups' Butterfinger filling, which features crunchy pieces.

The couple are shown having some uncomfortable moments in the waiting room, as they draw the attention of much-older couples such as Fish and Chips and Oatmeal and Raisins.

The waiting room walls are decorated with suggestive prints (images of bananas and cherries), and another couple emerges from the doctor's office eagerly embracing a several-foot-long salami.

In a not-so-subtle dig at the smooth filling of market leader Reese's Peanut Butter Cups, the female Chocolate character suggests that it might be nice to try something "new...and crunchy." Her partner demurs: "Crunchy? We're smooth, babe. We always have been. We're classic." His resistance begins to fade, however, when she shows him an apparently naughty spread in Exotic Snacking magazine.

The campaign, with the tagline "The Cup Just Got Crunchy," is from the Dailey ad agency.

“We hope the Big Game attracts the largest audience ever to lay a finger on Butterfinger, and we’re excited to showcase our brand’s irreverent sense of humor on this national stage for the very first time,” said Butterfinger brand manager Jeremy Vandervoet when the brand first announced its upcoming Super Bowl debut.

Butterfinger is also promoting the new candy, and the Super Bowl ad teaser video, on social media, including Twitter (where it will use #CupTherapy).

The Butterfinger cups, reportedly in development for more than two years, are available in stores nationally as of this month.