Celeb-Backed Photo-Quiz App Asks Brands If They Really Are Ready To Play... And Entertain 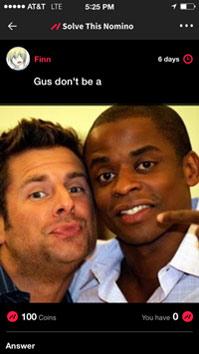 As much as the “native ad” trend has polluted the Web with publisher doublespeak about church and state, crap links, wind-and-a-nod “sponsored post” labels designed to be overlooked, the field has accelerated at least one good trend. Developers are starting to think about brand integration at inception and playing with content experiences in which brand presence is natural and perhaps welcome. We are starting to see app projects that are indeed content rich, but also informed by this increasing need to monetize without traditional advertising.

Entertainment is the natural starting point for this trend, because people already regard the advertising as enjoyable content. The movie trailer and trivia app Trailerpop is a good example, where marketing presence and the basic user experience enjoyment are seamless.

The new app Nomino caught my eye because of both its progeny and its engaging blend of mobile, social, entertainment and branding. It is part Instagram and part trivia challenge. Users post images (often small segments of an object) and ask questions about it. Sometimes the challenge is merely to identify the object, but more often it uses the image as a visual cue to a trivia question. “Which episode of ‘psych’?” it asks beneath a still from the show. The USA Network series pops up a lot in Nomino because it is the first brand partner and because one of the app’s creators, co-star Dulé Hill, got the show in its final season to experiment with his latest investment in emerging platforms.

The core idea for the app came from a friend of Universal Pictures VP of Multicultural Marketing Talitha Watkins, who was also Hill’s friend and now partner in the app. The game is based on a behavior Watkins tells me she was already seeing in Instagram and other social channels: people posting partial images of objects or of their current location and asking friends to identify the what and the where. Hill, who is a highly engaged celebrity on the social media channels, brought his experience and profile to the project as well as the first marketing partner.

As in Trailerpop, the use of pop culture as content makes for a seamless integration of marketing messages and branding. “[The psych team] saw the benefit of asking the fans in the final season what were their favorite moments or posting images to see if fans can name the episode or guess character nicknames,” Watkins says. The app first released earlier in the spring but got supercharged when the psych campaign started. “We found incredibly high engagement,” she says. “So much so that fans started pasting their own images, and that is the idea -- the users becoming the co-creators.”

The inclusion of psych also led to a spike in downloads and sharing. That investment of users in the content helps the virality of it all. “We lend well to brands that have influencers looped into their program,” she says. The game is played for points that can be redeemed for sponsored merchandise and gift cards.

Leaning forward, the platform already has video capability for clips up to 30 seconds. Most users have not grabbed onto this functionality, but one can see its attraction to brand marketers. Watkins says the startup is already exploring new integrated marketing formats for brands that want to be part of their launch. Sponsored images is just one possible permutation of a platform that allows for user-generated audio, image, text and video. A sponsored scavenger hunt is one likely evolution.

In part because of the psych connection and also the general skew of casual gaming, a recent survey with TeenVogue found that 80% of Nomino’s users are 13- to-34-year-old females. “They over-index for casual gaming, for TV watching and for psych,” she says.

The app is an attractive blend of genres and marketing appeals. One can imagine an adventurous CPG brand having some fun with itself here by leveraging its own brand heritage and earlier connections with pop culture to weave its way into the fold. And although the app was built with brand experiences woven into the content and business model, what is interesting about the format is that it doesn’t allow for advertising as usual. The only place for a brand here (unless they are unwise enough to slap banners into this thing) is as entertainment. They have no choice but to be imaginative. As so many publishers trip over themselves to rationalize their “sponsored posts” as content the user really is interested in, I prefer this model. Create a a sponsor-supported content experience where brands have no choice but to be creative.