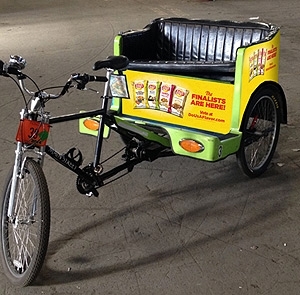 As part of the integrated campaign supporting this year's "Do Yourself A Flavor" contest, Lay's is delivering free samples of the four consumer-generated finalist potato chip flavors to fans in eight cities.

The promotion is designed to drive awareness via social media buzz and sales of the finalist flavors (Cheddar Bacon Mac & Cheese, Kettle Cooked Wasabi Ginger, Cappuccino and Wavy Mango Salsa) during the voting phase of the competition, which began when the flavors hit stores in late July and ends on Oct. 18. The vote will determine which finalist flavor entrant wins a $1 million prize (the other three finalists win $50,000 each).

The sampling kicked off on Aug. 15 and 16 in New York City. Baskets bearing the Lay's finalist flavors, deli sandwiches, bottles of PepsiCo's Aquafina water and other picnic fixings were delivered to Manhattanites by Uber's courier service, UberRush.

To request to receive one of the 200 baskets delivered over the two days, Uber app users entered a designated promotional code. A postcard in each basket encouraged recipients to post photos of their Lay's picnic spread using the hashtag #FlavorRUSH, and to vote for their favorite finalist chips flavor.

In the second leg of the promotion, consumers in seven more cities will be able to use the @Lays Twitter handle to vie for samples of Lay's finalist flavors that are being delivered to their homes or offices via branded pedicabs. Deliveries (20 per city) were offered first in Boston, on Aug. 18. The program will be repeated in Santa Monica, Austin, Chicago, Denver, Washington, D.C. and Seattle, in turn, between Aug. 20 and 28.

These free sample delivery offers are being promoted on the "Do Us A Flavor" Web site, and through Lay’s Twitter handle and Facebook page. Tweets and posts are geotargeted and promoted within each activation city.

Mahal hadn't yet received response reports for the Boston activation, but did say that most fans responded within 15 to 20 minutes of seeing a promotion, and that the brand expects to realize "great" user-generated content from the sampling initiatives.

Fans are being offered a wide array of options for voting on flavors. In addition to DoUsaFlavor.com, they can use dedicated hashtags to vote via Twitter, Instagram, Vine, or texting.

Lay's is also the first PepsiCo snack food, and the first product within the food category, to run a program on iTunes Radio, in partnership with Apple's iAd, according to Mahal.

The program offers fans several ways to engage during the contest's voting phase. They include a "Flavor Finder Quiz" that assigns fans a finalist flavor based on their answers to questions; direct tweet-to-vote capability (employing in-ad Twitter functionality to drive consumers to vote across iTunes Radio media — another PepsiCo brand first); and an interactive flavor product gallery. In addition, Lay's is breaking new snack-food category ground by delivering customized calls-to-action and audio to iTunes Radio users.