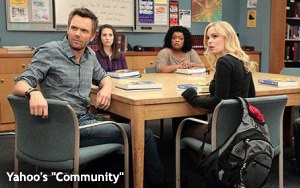 Yahoo sounded just like a regular TV network as it announced a slew of new shows at its NewFront presentation to advertising executives Monday evening in New York.

The online giant’s programming announcements included a reality-competition show called “Ultimate DJ,” spearheaded by Simon Cowell and designed to identify new talent in the field of electronic-music DJs, and “I Am Naomi,” a talk show hosted by supermodel Naomi Campbell.

Also on the lineup: A fast car show called “Riding Shotgun with Michelle Rodriguez,” the actress from the “Fast and Furious” movies, and a new scripted sitcom called “The Pursuit” (as in “the pursuit of happiness”) about a group of twenty-somethings in New York. Yahoo will continue the ill-fated sitcom “Community,” canceled by NBC; a regular newscast with Yahoo’s most visible star, Katie Couric; and, in general, an increase in video content from Yahoo’s various lifestyle verticals: travel, fashion, finance, food and the like.

But a huge question loomed over the announcements: Will anyone watch them or share them?

A show about electronic-music DJs? Well, Cowell himself came on stage and insisted this show would work because this music is the fastest-growing category of popular music in the world.

A new sitcom about a group of New York twenty-somethings? Yes, said Yahoo Chief Marketing Officer and head of media Kathy Savitt. She insisted that “The Pursuit” would be a modern-day “Friends.” Moreover, it is designed to reach an audience of millennials. And isn’t that what advertisers want?

What about Yahoo’s plan to revive “Community”? NBC cancelled it, presumably because the audience it drew was too small to earn it a renewal. So why did Yahoo pick it up? One reason could be the reputation of its core fans, who are believed to be so intensely loyal that they will follow this show anywhere, even to Yahoo. Another, perhaps more likely reason: The show’s track record in the area of product integration.

On NBC, “Community” was infamous for producing entire episodes that revolved around a single, real-life brand – most notably, Subway, the sandwich chain. At its newfront held in Avery Fisher Hall at Lincoln Center, Yahoo gave every indication that the doors of “Community” are wide open for integrated-marketing business opportunities. It even showed a series of clips in which Honda cars appeared to have taken over the show.

“Tonight is all about sharing our premium video opportunities,” said Lisa Utzschneider, senior vice president of Americas sales for Yahoo. “You want premium content and the ability to connect with a loyal and engaged audience across any device,” she told her audience of ad execs.

“You want flexibility and scale. And as marketers, you want to integrate your brands in a premium environment and be able to buy programmatically with the ability to scale it up and scale it down. And you want data and measurement to back it up. So basically, you want it all. And we’re here to give it to you,” she said.

Later in the presentation, Utzschneider returned to the subject of programmatic buying with a pitch for BrightRoll, the programmatic facilitator. Yahoo bought BrightRoll last year reportedly for $640 million. “This year, for the first time, you will able to buy programmatically thanks to Yahoo’s acquisition of BrightRoll -- the industry’s leading programmatic video advertising platform,” Utzschneider said.

At Yahoo’s NewFront, Utzschneider shouldered the sales-presentation portions, while Savitt handled the programming side. Yahoo’s celebrity CEO, Marissa Mayer, was less visible than her two executives, but she appeared onstage near the conclusion of the presentation to add a few remarks.

“Our efforts tonight are all about video, and we’ve made substantial progress this last quarter,” she said. “With BrightRoll, Yahoo now has 188 [million] unique video [visitors] per month. This means Yahoo now has the No. 1 reach in the marketplace.”