The Backstory On The Resurgence Of BK's Chicken Fries 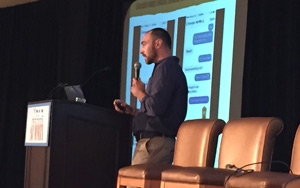 KEY LARGO, Fla. — A little more than a year ago, as Burger King was tracking social conversation where the brand was mentioned, the company started seeing a real explosion.

It was February 2014 and people were talking on Twitter about how much they missed the fast food brand’s chicken fries and how they wish that they would be brought back. One user even joked that they would kill their dog if Burger King didn’t bring back the product.

The company determined that the interest seemed to be mostly among high school and college-age consumers, says Adam Gagliardo, senior director, media and communications, Burger King, who gave the keynote presentation at MediaPost’s Mobile Insider Summit.

“We realized there was definitely an opportunity here,” he says.

The item — chicken strips shaped like fries that come with a choice of dipping sauce options — were originally launched in 2005, dropped as part of a menu revamp in 2012, and reintroduced on a limited-time basis in August 2014.

During the brief 2014 return, consumers were promised that they would be brought back permanently in 2015.

The hashtag #chickenfriesareback got over a million mentions in a week during the 2014 return, Gagliardo says.

The company knew from the crazed consumer reaction in 2014 that there was the possibility of getting a big bump when the product returned in 2015, but it needed the right marketing.

First, the brand decided to target consumers under age 24, who already seemed to be diehard fans of the product.

“The macro trend that we wanted to capitalize on from a digital perspective was the rising growth of Instagram,” Gagliardo says. “Teens are saying that Instagram is the most important social network to them, so that’s where we needed to be.”

Ad opportunities on Instagram have been somewhat limited. So the brand decided to make the packaging the hero, to hopefully inspire consumers to take pictures and post. A high-reach Instagram campaign promoting the hashtag #chickenfries seemed to work.

“Our paid engagement rate was practically the same as organic engagement,” Gagliardo says.

The company experienced an Instagram follower growth spurt, increasing over 7% over the course of the campaign.

“All in all, there was some good learning there in what a paid promotion can do to continue to gain followers,” Gagliardo says.

A second learning is that Millennials truly do message about brands they care about using messaging apps such as WhatsApp, Messenger, LINE and WeChat. Private messages are commonly shared on social.

The brand decided such activity called out for a chicken fries-inspired emoji native keyboard. The brand enlisted the Kik messaging app to promote the sticker pack and the emojis were featured on packaging at the restaurant.

Also part of the mix was a Snapchat discover execution.

The emojis seemed to do the trick.

“Our goal was for every 13-year-old who buys the product, how can we get 10% tell their friends?” he says.