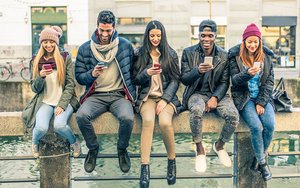 For the second quarter of this year, Nielsen says 18-34 consumers averaged 18 hours and 27 minutes of TV usage per week, with smartphone usage now at 14 hours and 36 minutes.

By way of comparison, all adults 18+ watch 32 hours and 32 minutes a week, with 12 hours and one minute of smartphone usage. Nielsen says the research looks at usage in the U.S. population.

In a somewhat related finding, TV-connected device usage is the highest among 18- to-34-year-olds — at 6 hours and 40 minutes a week. Among all adults, this number is at 3 hours/58 minutes. Consumers 35-49 totaled 4 hours/11 minutes a week.

While young consumers' share of TV and smartphone usage is the closest among all demographic groups, 18- to-34-year-olds do not have the highest smartphone usage overall. The top spot goes to consumers 35-49, who average 14 hours and 48 minutes. Those older media consumers total 29 hours a week when it comes to overall TV usage.

Most TV usage per week occurs with those 50 years and older -- at 43 hours and 53 minutes. This group also logs in with the highest radio usage — at 14 hours and 7 minutes.