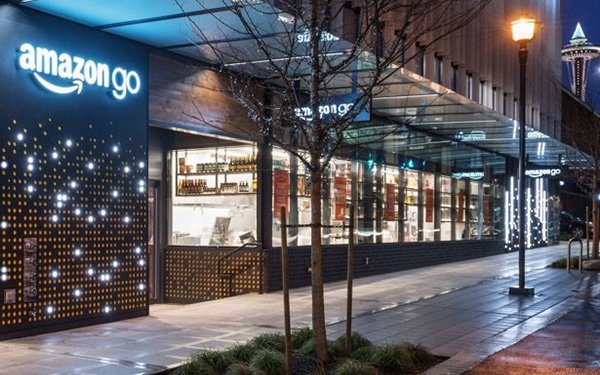 That’s one of the promises of the Amazon Go store opening to the public today after more than a year of testing with Amazon employees.

The idea is that consumers use their phones to identify themselves as they enter the store, pick up items as they shop and when done, then walk out the door, triggering a charge of all the groceries to their Amazon account.

This is well beyond the established practice of self-scanning and self-checkout and is accomplished through tracking. Make that lots of tracking.

Cameras have been used in stores for many years, such as in big box retailers to measure traffic patterns.

In recent years, tracking has gotten much better, thanks to the introduction of IoT sensors, such as beacons.

Dwell time, the amount of time a person spends in a store, has been one of the benefits to marketers, as well as knowing how many customers are repeat customers and what likely drove them back to the store.

At the recent annual Big Show put on by the National Retail Federation, various forms of in-store camera usage were highlighted.

The key is that in-store cameras can be used for different things.

For example, AT&T and Samsung displayed cameras that tracked customers in the aggregate, creating heat maps of traffic patterns.

Meanwhile, NEC showed cameras used for identifying specific customers and tracking them as they travel the store aisles, providing targeted messaging to them on screen displays in the store.

Many in-store display screens have cameras built in, so in addition to providing messaging to shoppers, they also can capture demographics of who is actually seeing those messages.

Cameras in screens in stores are not new, but the tracking technology involved is getting significantly better.

The question is how much will consumers realize about this technology and, of those who do, what their reaction might be.

If nothing else, Amazon Go may provide a glimpse of consumer reaction.

Especially, as shoppers come to realize that everything they do when in a store is monitored.