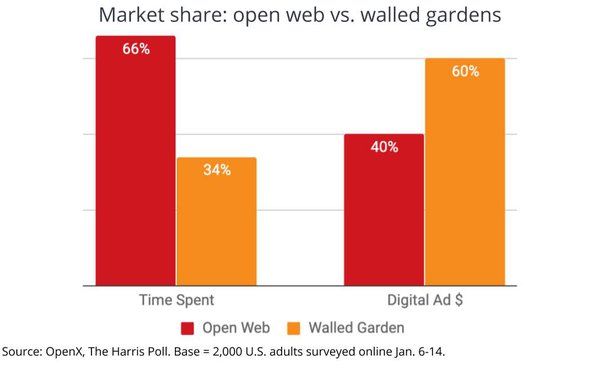 A fundamental paradox of the digital advertising marketplace is underscored in a new report from programmatic exchange OpenX and The Harris Poll, which shows consumers are far more prone to use the so-called "open web" and to be influenced by advertising there than on "walled gardens" like Google, Facebook and Amazon.

It's a paradox, because while the open web comprises an estimated 66% of the time that American consumers spend online, it reaps only 40% of digital ad budgets.

The study also found that most Americans say they are using walled garden platforms less, or plan to, and that they have far more negative sentiment associated with spending time there -- especially when being exposed to advertising.

"The lack of trust in the content viewed on the walled gardens may help contribute to overall negative feelings about those environments, and more than 40% of people report that Facebook leaves them feeling unhappy, upset or unsatisfied, which is more than double those that say that about the open web," the report notes, adding: "From an advertising perspective, consumers tend to turn to the open web first at key moments in time for marketers to reach them. When looking for info on a business or for products to buy, 80% of people turn to the open web first, and 75% of people looking for gifts to give start their search on the open web. YouTube, on the other hand, is the first choice when people are looking for 'how-to' information, while Facebook and Instagram lead when people are looking for info on friends and family." 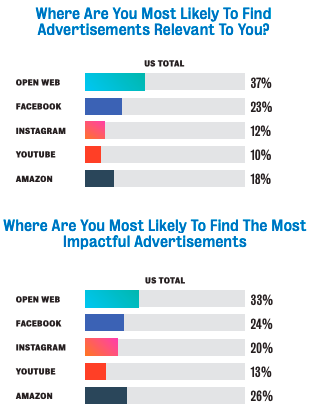