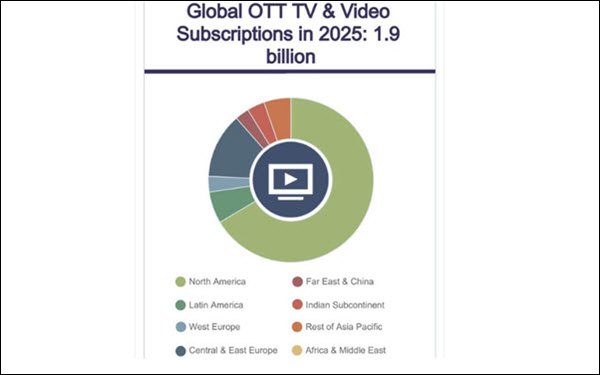 The growth will be driven primarily by traditional broadcasters’ turning to streaming services to compete with Netflix, Amazon Prime Video and other online video giants, says the researcher, in a new report focused on OTT TV and video streaming trends.

The report forecasts that broadcasters’ growing number of hybrid services that combine subscriptions and ad-supported, lower-priced tiers -- such as NBC’s Peacock and CBS All Access -- will account for $1.4 billion in advertising spend in 2025.

Such new models will become increasingly necessary to battle subscription fatigue, notes Juniper. That’s particularly true for the U.S., where Juniper reports a current average of four subscription-based video-on-demand subscriptions per household, but also forecasts significant slowing in the growth of SVODs this year.

Juniper also forecasts that more than 70% of streamed video sessions over the next five years will occur on smartphones, driven by social videos on platforms like TikTok.

But because such videos do not yield a high number of advertising slots per video watched, smartphone advertising spending is projected to grow at an average rate of just 2% per  year over the forecast period.