OTT, Podcasts And Blogs: Oh My, How Retail Media Is Evolving 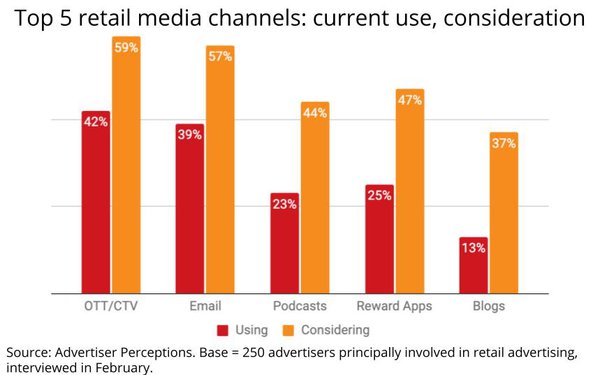 It may seem disingenuous for me to report -- and comment on -- this finding in a blog, but blogs are among the top non-traditional retail media channels being used or considered by retail advertisers to activate their commerce.

That's one of the findings of a new analysis from the team at ad industry customer satisfaction researchers Advertiser Perceptions, which fielded a survey of 250 ad execs with principal responsibility for retail advertising in February.

The timing is telling, because it comes after nearly year in which many brands -- certainly retail-centric ones -- adopted or shifted dramatically into digital channels as a means of connecting with stuck-at-home consumers during the COVID-19 pandemic.

The analysis indicates blogs are among the top five channels that have the greatest momentum among so-called "retail media" options -- although the biggest winners are OTT/CTV, email, podcasts, and not surprisingly, reward apps.

To be sure, the study also finds that actual commerce platforms -- or what some call "marketplaces" -- such as Google, Facebook, Amazon, Walmart, etc. -- remain the go-to channels for driving retail sales, and most of that momentum is digital as well.

But it is noteworthy that media like OTT and CTV as well as podcasts -- and yes, even blogs -- are now among the fastest-growing tertiary retail media channels.

"Demand is broadening the business beyond the triopoly (Google, Facebook, Amazon)," the report notes, citing that big strides by "Walmart Connect, PromoteIQ, and Snapchat now register as 'must buy' media for a significant percentage of advertisers."

But the rapid emergence of the tertiary channels indicates that retail media is no longer a simple mix of retail platforms, and their integral media channels.