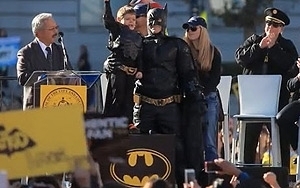 Ace Metrix has released a list of the most effective television advertising brands in 20 categories in 2013.

Winners are based on their Ace Scores, which reflect the interplay between an ad's measured "persuasion" (comprised of likeability, information, attention, change, relevance and desire) and its measured "watchability" (likelihood of watching the ad again). All nationally aired ads are scored by 500+  U.S. consumers weighted to the U.S. census for age, gender and income.

This  year, the winning ads came from 6,400 ads across 85 categories (the full list and analysis of all 85 category winners will be published in the annual Ace Metrix Blackbook).

Google's Ad of the Year

The Ad of the Year, Google's 90-second "Here's to 2013," was an inspirational look at the events of 2013 through the lens of Google Search (one frame from the spot's events highlights is shown above).

The award goes to the spot that most outscores the 12-month average score of its overall category. The Google ad achieved an Ace Score of 663, beating the Web sites category's average by 46%.

Google also had three additional ads in the year's top five highest-scorers (for its Google Search, Answers and Play). This "is a testament to Google's ability to make technology feel heartwarming," observes Ace.

Brand of the Year Winners

Only one brand won its category both this year and last year: Liberty Mutual Insurance, with an average Ace Score of 564 for its continuing "Humans" campaign.

The other announced winners include:

Apparel and footwear: Reebok  Reebok edged-out Adidas and Wrangler, with an average Ace of 504 for spots in its "Be Ready" campaign, featuring Demarcus Ware and Rampage Jackson.

Auto, luxury: 2014 Buick LaCrosse  The LaCrosse ads (such as "Breathe," as in "breathe a little easier") focused on technology, performance and value, pulling  an average Ace of 558, to edge out Mercedes and BMW.

Beer: Samuel Adams  This craft beer brand pulled an average score of 512, beating out mass-appeal brands with ads that offer a "personal touch" (including featuring its employees), notes Ace.

Spirits: Bacardi  Bacardi earned a 509 average score, edging out Smirnoff with ads that largely focused on its rich Cuban history. Ace points out that storytelling and rich visuals are key in the spirits category, where no single brand produced more than seven pieces of creative.

Non-alcoholic beverages: Tropicana Farmstand  This brand came from behind in the final weeks of 2013 with two strong ads, to earn an average score of 617.  Its creative ranged from highly visual to celebrity-driven spots. Ace notes that, surprisingly, its closest competitors were Dunkin' Donuts coffee and tea, Lipton and Coffee Mate, as opposed to "the likes of Coca-Cola."

Candies and snacks:  In an always-high-scoring category, Reese's edged out Hershey's, Oreo and a host of other brands with a 15-second Instagram-friendly spot (a holiday ad riffing off Santa's list) that Ace describes as "ridiculously simple but ridiculously clever."

Financial services: TD Ameritrade  With its storytelling ads and recent Olympics sponsorship ads, TD Ameritrade earned an average score of 541 in a category that is generally not high-scoring -- beating out Fidelity, Wells Fargo, Citbank and JP Morgan.

Household: Dawn  In a highly competitive category from a scoring perspective, Dawn beat Ziplock and Swiffer, with an average score of 610. As in past years, Dawn successfully freshened its winning "wildlife" campaign.

Packaged foods:Marie Callender's  This brand's creative focus on its "savory products and ingredients" earned it a 573 average score in a highly fragmented and competitive category, notes Ace.

Personal care: Oral-B  Oral-B had an average score of 583, winning in a "landslide" over Crest and Colgate, according to Ace, which notes that dental products are less "polarizing" than cosmetics or shaving creams.

Technology, hardware: Vizio M-Series  Vizio (which has risen from an upstart brand to the head of the pack in just over a decade, points out Ace), pulled an average score of 609 with ads including "What Is Smart."

Technology, mobile devices: Amazon Kindle Fire HDX  With ads that included creative focused on the Fire HDX's live-help "Mayday Button" feature, Kindle showed exceptional scoring consistency across its efforts, for an average of 578. LG and Windows Phone were the runners-up, while heavyweights Samsung and Apple had "big hits and misses" across its ads, reports Ace.

Technology, software and Web sites: Google Search App  Google's 2013 winning streak included these ads, with an average score of 570. (One example was "Smart Dad," showing a dad using Google Knowledge Graph to answer his son's questions about the solar system.) Ace notes that Microsoft was also in the competitive mix for the category, with ads for Windows and Bing.

Technology, video games and consoles: Xbox One Jennifer 30  Microsoft "continued its resurgence across its brands" by taking this category with ads that earned an average score of 591 (notably, beating archrival Sony by 80-plus points), reports Ace.

Telecom services: Netflix  Ace describes Netflix's win in this category (with an average score of 547) as "a bit of a stunner," since it beat leading brands in both wireless (AT&T, Verizon, T-Mobile) and TV services (DirecTV, Dish, Fios). Netflix pulled this off with content that spotlighted the various programming available on its service and the benefits for consumers, says Ace.

Sample ads from the winners in the 20 categories can be viewed on Ace Metrix's news blog.