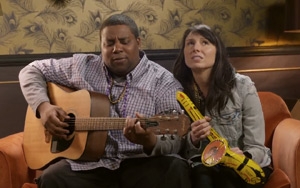 NBCUniversal, through its Client Solutions Group and its Content Innovation Agency (CIA), has serious game when it comes to rolling out partnership vehicles for advertisers looking to get behind original branded content. For Honda and its automotive vehicles, that digital content is a new program tied to perpetually-hip “Saturday Night Live.”

The automaker is integrated in NBCU's new "Saturday Night Line" digital platform, a serial on NBC.com and video-on-demand channels like Hulu. The program, with which Honda is promoting its 2015 CR-V SUV and brand new 2016 HR-V crossover, takes viewers to the sidewalks outside Rockefeller Center, where fans of the show wait in line -- sometimes for days -- for a chance for tickets to an SNL taping. The digital series, starring Upright Citizens Brigade's Michael Antonucci as host, engages those SNL fans in games, conversations, and surprises, all of which involve Honda and its vehicles in some way. It also involves the SNL cast.

In one, SNL's Sasheer Zamata has to interview people on the line using as many auto-related cliches as possible as she asks them about themselves. When she reached the magic number of cliches, the guy she was interviewing won tickets to the show. In other episodes, fans are chosen to go upstairs and meet cast members in ersatz improv scenarios, such as meeting Kenan Thompson. Honda is running pre-roll advertising before each episode.

American Honda spokesperson Melissa Martinez says the genesis of Honda's involvement was the automaker's media agency Mediavest looking for strategic partnerships. NBCU brought up the idea of a potential partnership with Saturday Night Line, and worked with Honda and Mediavest on concept development and execution details. "As this is SNL's 40th, the cultural alignment was perfect," she says, adding that Honda worked with CIA/NBCU to ideate, select and refine each idea, and define how the brand would be integrated and at what level. "It's always a fine balancing act, making sure the brand is represented correctly, while not getting in the way of a properties or talents' creative process."

Scott Schiller, EVP, digital advertising sales at NBCUniversal, says partnerships like Honda's with SNL involves NBCU “sitting down with clients before and during the upfront, and talking marketing objectives,” and that the company makes the integration of consumer brands into digital content a collaborative effort. “With the CIA in our Client Solutions Group we work not just with advertisers, but with multiple agencies, including media buying and creative. And it's not a ‘set it and forget it [approach].’”

He says NBCU's magic sauce is the ability to promote platforms like Saturday Night Line and Honda's presence, on V.O.D., digital and broadcast. “We are one of the largest media companies in terms of the diversity, depth and types of platforms,” he says, adding that Honda gets the Millennial audience it seeks, as well as “an association with one of the hottest franchises in entertainment, and credibility with that audience.”

NBCU will pitch the “Saturday Night Line” program to advertisers at the forthcoming upfront, says Schiller. “We want to do more in terms of leveraging our content. We want to work with advertisers across multiple platforms for shareable content to take advantage of the fact that a large percentage of social is about TV content.”