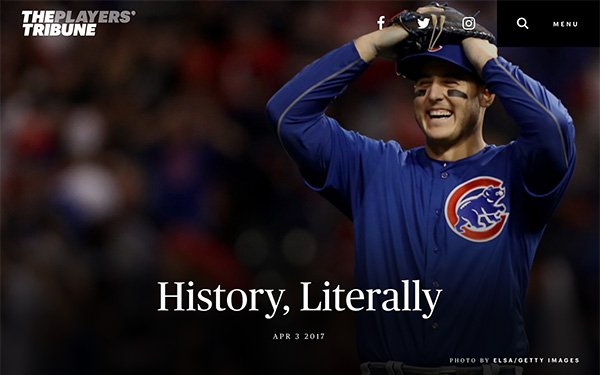 Jaymee Messler, president of The Players’ Tribune, stated: “This program offers Tyson Foods the opportunity to tap into our community of premier athletes to produce original and entertaining multimedia content that aligns with our premium content sensibilities, and which will engage both our audience and their consumers.”

The video series will be in three parts and feature interviews with Ortiz and Rizzo on “their thoughts about baseball and how the game has shaped their lives,” according to a statement.

The Players’ Tribune has committed to expanding its own video offerings after securing $40 million in Series C financing in January. The company is developing a movie about former NFL player Vernon Turner with production company Magic Hour.

As part of the expanded partnership with Tyson Foods, Ortiz and Rizzo will write first-person articles about their baseball experiences. On Monday, site published Rizzo’s article “ History, Literally,” where he describes Game 7 of the World Series.

The duo will also contribute to the shopper marketing digital content experience, “Legends at the Grill,” located on a Tyson Foods microsite. The baseball stars will discuss grilling myths featuring Tyson Foods’ grilling products, such as how to flip Hillshire Farm smoked sausage, where to place Ball Park hot dogs and how to grill Wright Brand bacon.

The Players’ Tribune was founded in 2014 by former Major League Baseball player Derek Jeter. More than 1,200 pro and college athletes across multiple sports have contributed to the site through features, video programming, audio and photography.

Carlos Watson, Ozy co-founder and CEO, stated: “In an industry that has the power to produce riots, churn billions of dollars in revenue, and create legends that will never be forgotten, ‘The Huddle’ will provide OZY readers an edge on the future of sports.”