Who's On First: IPG Weighs In On Programmatic Auction Shift 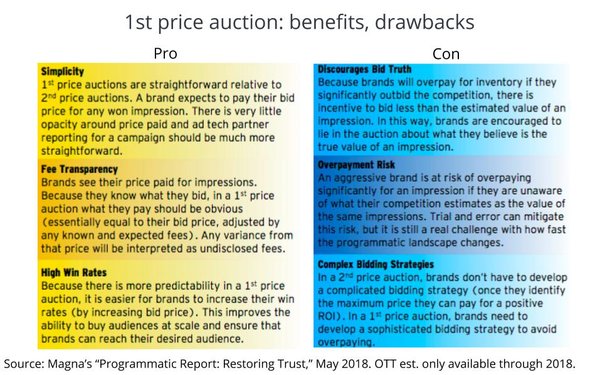 In what may be the first publicly espoused opinion by a major agency holding company, Interpublic’s Magna unit this week published a report on the shift from the programmatic media-buying marketplace’s so-called “second price auction” model to one based on first price bids.

In the report, Magna’s May 2018 “Programmatic Report: Restoring Trust,” the agency intelligence and negotiating unit more or less makes the case that first price auctions are inevitable and outlines the tradeoffs involved in the shift.

“There are two significant developments in the programmatic space working to improve transparency, simplify the programmatic landscape, and restore trust. These are the transition to first price auctions from second price auctions, and the implementation of ads.txt,” Magna’s team notes in the report. “These initiatives continue to be led organically from within the ad tech industry, and we continue to expect changes and improvements to happen organically rather than through regulation.

“Changing programmatic buying auctions from a second price system to a first price system may sound like an arcane and minor detail, but the consequences of this shift will be far reaching, and the impact on price, supply, and fees will be felt for years to come. In addition, while ads.txt was initially implemented as a tool to fight fraud, it will also have a significant effect on fighting hidden fees and will catalyze consolidation within the programmatic ecosystem. Adoption of ads.txt continues to rise, and by the end of 2019 we expect it will be a fully viable strategy to only transact on inventory that has ads.txt enabled.”

The shift, which as Magna notes has been happening gradually, grew out of other changes in the infrastructure of programmatic trading, especially the adoption of so-called “header bidding,” and was first noted by big exchanges, including OpenX, which first sounded the alarm.

But agencies -- and their clients -- have largely been silent observers until the Magna report, more or less watching the market dynamics play out.

Originally, the second price auction was put in place by the earliest developers of programmatic audience bidding, because they wanted to create an assurance that advertisers would not overbid in their auctions. In a second price auction, an advertiser is protected from overbidding because regardless of how much they offering their winning bid, they will only pay what the second-highest bid offered plus one cent.

The bidding safety net helped grease the wheels for the programmatic audience marketplace, which is now worth billions of dollars annually, and likely represents the majority of digital advertising buys, depending on how you calculate it.

Among the positive changes, Magna notes that first price auctions are simpler than second price bidding, have greater fee transparency, and result in higher win rates. Among the negatives, the agency says, is that it “discourages bid truth,” creates a propensity for overpaying for inventory, and likely will lead to complexity in bidding strategies.

I think overall we’re in the position of first price auctions are a necessary evil to clear up some of the stuff that has been going on in the programmatic ecosystem," says Magna Vice President-Digital Intelligence Luke Stillman. "Obviously, second price auctions still work in many places (search, social, etc.). We expect a lot of the changes going on now are going to accelerate consolidation and I’ll be most interested to see what happens with Google sticking to their second price guns entirely, especially as they gain market share."