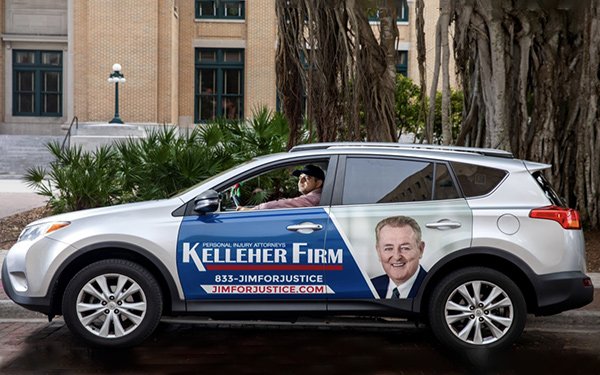 Cars may not yet be self-driving, but that isn’t stopping them from becoming advertising vehicles.

At the third annual Synapse Summit in Tampa, Florida, this week, a local startup showed its approach to on-car advertising combined with state-of-the art location tracking.

In a novel twist to outdoor advertising, Nickelytics signs up drivers of ride-hailing companies like Uber and Lyft, wraps their cars in advertising and then tracks who sees the ad.

Nickelytics adds an Internet of Things device to the car, which counts nearby Wi-Fi signals and disregards phone MAC addresses belonging to devices other than smartphones and then identifies phones near the vehicle.

It then uses a data aggregator to correlate the unique phone identifiers and sends the data to the customer dashboard for digital retargeting on social media including LinkedIn, Facebook and Instagram as well as ads in mobile apps.

“All data remains anonymized through the entire process, with no personal identification,” Justin Christie, director of operations, told me at the company display at Synapse.

Nickelytics also can dispatch vehicles to specific locations, such as a fleet of cars with the same ad to an event for additional driver compensation.

The car ads are running in a dozen campaigns in Florida, Colorado, Maine and Louisiana.

Advertisers include the law firm Kelleher Firm, realtors Re/Max and Point South Group, the credit union 121 Financial, and others including Exiom, The Sheets Team, The Penny Hoarder and Social Security Works.

Cars wrapped in ads are becoming part of the IoT ecosystem.