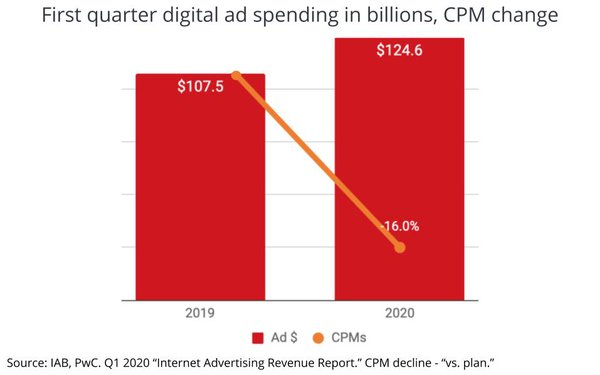 First-quarter 2020 showed (year-on-year) YoY advertising growth despite the impact of COVID-19 beginning in March -- but the pandemic did create significant pricing pressure on CPMs, with digital falling 16%.

The industry remained relatively resilient in the first quarter of 2020. “The growth, about 12%, declined from 16% for the full year, but we think there was some slowing overall, excluding COVID-19,” said David Cohen, President of the IAB. “We found most companies didn’t feel the impact from COVID until mid-March and some didn’t feel it until late March. We’re not seeing the full impact, and we won’t until the second quarter.”

The growth was driven mostly by video, along with social, as well as mature formats such as search and banner ads.

The Interactive Advertising Bureau released its 2019 Internet Ad Revenue Report Thursday compiled by PwC, but this year the IAB also included separate insights on Q1 2020 revenue and the second edition of its Coronavirus Impact Report on publishers.

CPMs did fall in the first quarter. Data from the second study of sellers in the IAB’s proprietary research reveals that COVID-19 put significant pricing pressure on the majority of sellers. In fact, two-thirds of sellers experienced a decline in CPMs. Publishers were hit the hardest, with six in 10 experiencing a decrease in CPMs -- a 14% greater impact on CPMs versus programmatic specialists.

Display advertising also took a hit, with mobile and desktop experiencing more than a 30% decrease in ad rates. When it came to advertising by device, connected devices such as streaming sticks, gaming consoles and smart TVs showed the most resilience, with an expected decrease in CPMs of just 6%, while desktop, smartphones and tablets were down 27%, 28%, and 29%, respectively.

From mid-March through today, IAB fielded five surveys showing the impact of COVID, including the comparisons from ad spending and ad revenue showing a decline in CPMs.

“We’re seeing in this new CPM study that connected devices are experiencing the least impact,” said Sue Hogan, SVP of research and analytics at the IAB.

She found it interesting to see how rapidly brands pivoted to change the messaging to mission-based or cause-related.

Hogan said advertisers and publishers indicated a decline for the rest of the year, as nearly 70% of advertisers paused or cancelled campaigns in the wake of the COVID-19 outbreak.

She said media that provides flexible targeting and creative execution -- such as audio and search -- are better positioned in the near term to meet buyers’ needs as they make changes to adapt.