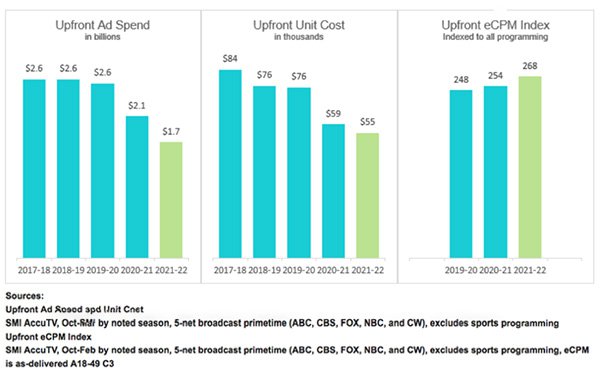 SMI says the trend is expected to continue for the next TV upfront ad market, set to begin in a few weeks.

“This funneling of both supply and demand -- coupled with the supply crunch due to video’s digital migration -- will leave the legacy video publishers in a position of strength-from-weakness to (likely) maintain price growth,” according to the TV advertising research company.

Effective CPMs -- which are calculated as "delivered" CPMs for upfront advertising inventory -- rose to a 268 index, up 14 points from a year ago for all programming for the 2021-2022 TV season so far (October through February).

The "supply crunch" has also dramatically resulted in an overall drop in legacy TV ad spending due to a shift of dollars to digital media.

For example, looking at five networks -- ABC, CBS, Fox, NBC, and CW -- total prime-time ad spend (for non-sports programming) dropped to $1.7 billion, season-to-date (October to March). The total was $2.1 billion over the same time period last TV season, and $2.6 billion for each of the previous three TV seasons.

At the same time, average 30-second commercial unit costs for upfront programming continue to drop -- due to a lower supply of viewing gross ratings points.