Programmatic To Account For 63% Of Display Ad Spend By 2016 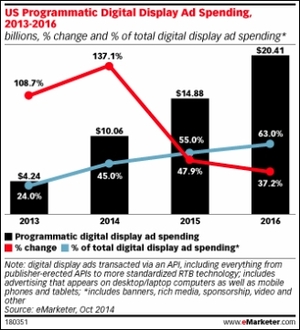 In its first deep dive into the U.S. programmatic display ad marketplace, market research company eMarketer estimates that programmatic spend in display advertising will top $10 billion this year, rising to over $20 billion by 2016.

eMarketer attributes the expected rise to over $20 billion in spend by 2016 to the rapid adoption of private marketplaces and programmatic direct deals. The company also cites the “continued maturation” in both mobile and video advertising. In short, the programmatic marketplace as a whole is maturing -- and is expected to continue to mature -- to include higher-quality inventory and new ad formats.

“Programmatic advertising has gotten a lot of hype in the last 12 to 24 months, but it’s finally fair to say that today, holdouts on participation are proving the exception, not the norm,” stated Lauren Fisher, analyst at eMarketer. “2014 has proven a pivotal year, and with the majority of infrastructure now laid and testing well in progress, we’ll see programmatic ad spending explode from 2015 into 2016.”

Despite the aforementioned rise of “programmatic direct” trading methods -- which is a hybrid model between traditional “direct” deals and new “automated” deals -- real-time bidding (RTB) is still driving the majority of growth, per eMarketer, at least for now. The company says that RTB auctions will account for 92% of all programmatic ad dollars in 2014, or $9.25 billion.

Open RTB exchanges still account for the vast majority (90%, or $8.14 billion) of RTB ad spend, with private marketplaces accounting for the other 10%. However, eMarketer projects open RTB spend to “remain essentially flat,” while private exchanges will grow to $3.31 billion (up from about $900 million in 2014).

Fisher told Real-Time Daily that the “enthusiasm for more controlled, private programmatic setups like private marketplaces and programmatic direct echoed across all company types -- publishers, agencies, brands, etc.” She added, however, that “marketers often only see a slight delineation between the two, which is certainly a trend worth watching as programmatic continues to evolve and grow.”

eMarketer also notes that banner ads continue to be the lifeblood of programmatic advertising, and while "richer" ad formats -- such as video -- are projected to continue rising, they aren’t expected to catch on as fast as banner ads. “Video, non-standard or custom rich media ad units and sponsorships are still typically sold via traditional direct sales channels,” notes its report. “For video ads in particular, that trend will continue through 2016.”

The research projects that programmatic will represent 40% of all digital video ad spend by 2016 ($3.84 billion). While eMarketer calls this “strong growth,” it notes that it would still underperform “when compared to programmatic’s share of overall digital display.”

“Today publishers largely guard high value ad inventory such as TV and premium digital video content, though we expect a great number of ads sold programmatically in these formats starting in 2015,” Fisher stated. “Those who do decide to turn to programmatic, however, are likely to do so via programmatic direct where they can still secure inventory guarantees.”

So what does it all mean for marketers? Fisher said that first and foremost, the projections mean automation isn’t going away.

“The marketers best position today are the ones that are already thinking about their own data and how it can best be applied to each of the main programmatic channels and transaction types to enhance their overall advertising efforts,” she said. “As mobile begins to account for the majority of US programmatic ad dollars in the next couple of years, it's going to be critical for marketers to start considering their advertising objectives from a cross-screen perspective.”