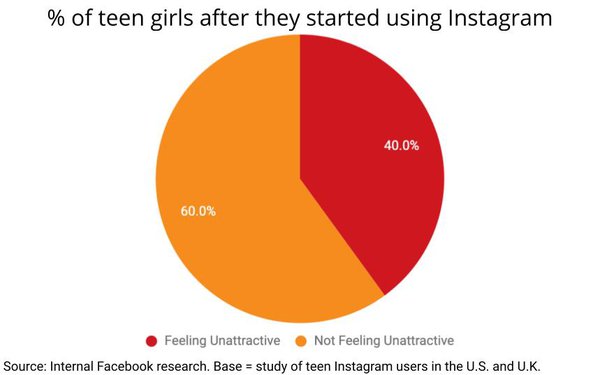 I was saddened (but I can’t say surprised) to read in The Wall Street Journal the recent stats about Instagram’s impact on teens: 32% of teen girls said they felt bad about their bodies and that Instagram made them feel worse.

And finally, about a quarter of the teenagers who reported feeling "not good enough" said it started on Instagram.

Based on our own experiences we know that feelings of envy increase as we spend more time on all social media -- especially Facebook and Instagram. These facts just underscore the severity of the problem.

We also know that despite Facebook's reported commitment to eliminating hate speech, it’s easy to find pages that spread misinformation on topics such as the election and COVID-19 vaccines.

Facebook continues to be a source of misinformation and an experience that negatively impacts our mental health, as individuals and as a nation.

This isn’t necessarily a new phenomenon. An Ohio State University study from 2014 found that many women compared themselves to the models they saw in fashion magazines, and reported feeling worse about themselves. They were also more likely to have dieted within five days of the study.

Still, there is something different about the impact that social media has on our psyche. That’s due to the speed at which information is shared, the number of people the platforms reach and the specificity in how messages are targeted for maximum engagement and impact.

While I would never advocate autocracy, I understand the motivation of the Chinese government in trying to protect young people by limiting the time teens spend on social media and gaming.

Over the last five years, I find myself asking, more than ever, how much hypocrisy am I willing to tolerate, both professionally and personally? Can I be friends with someone who wants to vote my rights away? Can I build bridges instead of walls? Can I recommend a media company that spreads misinformation, whether intentionally or not? Can I recommend a media company that makes teen girls feel suicidal?

On one hand, I’m not responsible for how anyone feels as a result of using a particular medium. You can argue that if someone feels bad using a platform, they should simply stop. But we’ve all experienced how challenging that can be.

Platforms should be responsible for helping users feel better about themselves, not worse. But recent studies clearly show that is not the case.

So what is our responsibility as brands and agencies? Can we, in good conscience, continue to recommend platforms that directly and negatively impact the mental health of our youth?

As an agency head, I try to reconcile that hypocrisy by making sure I explain to clients the consequences of advertising on Facebook and Instagram.

I know they need to use these platforms to reach their customers. I also know if I don’t spend their money on these platforms, they will go to another agency and I will go out of business and have to fire many talented people.

I tell my clients that while we can’t directly control how young people feel about spending time on these platforms, we can control how our messages make them feel.

We can make sure our messages are positive and supportive and are crafted recognizing the negative context in which they may be delivered. We can even craft messages to counter the negative impact of social media.