Gap Woos Gen Y With 'Back to Blue' 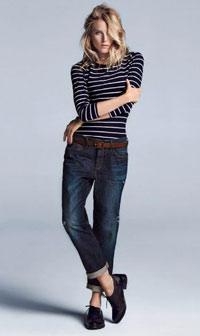 In its latest step on the comeback trail, the Gap is returning to its denim-and-chambray roots, wooing Millennials “Back to Blue” with the biggest marketing campaign in its history. It marks the San Francisco-based company’s first time on TV in four years.

The campaign -- which comes on the heels of strong second-quarter sales results --also includes print, outdoor, direct, social, in store, and digital.

"Back to Blue means getting back to what matters most -- our truest selves, when we are most comfortable in our own skin," says Gap CMO Seth Farbman in its release. "It's both a statement of how we feel as a brand, and how our customers want to live their lives and make their decisions.”

Much of the collection harkens back to the brand’s 1969 design roots. The effort includes a commitment to new digital content on a daily basis.

In addition to Facebook, Twitter, Pinterest, and Instagram, there is a Tumblr contest, encouraging consumers to create content, with the winning work earning a spot on Gap's Tumblr, which will then be turned into Tumblr mobile ads. Gap says it’s the first time a brand will own all of Tumblr's mobile ads in one day.

Gap is also beefing up content and adding video to its Styld.by platform, now in 30 counties, which partners with bloggers and style experts to create fall looks. There’s a series on style from Jenn Rogien, the costume designer for HBO's "Girls," for example. And it also includes features from 24 Gen Y style setters, including Tanisha Long from MTV's “Girl Code” and “Urban Bush Babes” blogger Cipriana Quann,  “sharing simple, raw and relatable stories about what it means to be one's most authentic self,” it says. In the series of photos, short films and gifts, each appears in a favorite piece from the new fall “Back to Blue” collection.

Print is running in Vogue, Lucky, InStyle, Glamour, and Vanity Fair in the U.S.

Gap says its sales for the quarter gained 8% to $3.87 billion, compared with $3.58 billion for the second quarter a year ago. On a comparable- store basis, they rose 5%. And sales for July rose 5%, with comparable store sales gaining 1%.  While sales rose at both Gap and Old Navy, they declined a bit at Banana Republic.

“We are pleased with our second-quarter performance overall,” says Glenn Murphy, its CEO, in the announcement, “and we’re focused on continuing our momentum as we move into the second half of the year.”