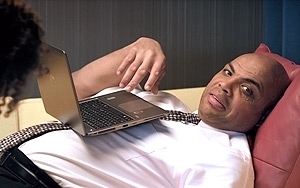 Gordon & Taylor, the fictional business firm able to hire Charles Barkley as an “IT technician” (and company basketball team ringer) thanks to CDW’s consulting, returns for another year during the NCAA basketball tournament this month, and this time it’s struggling with growth.

A new series of videos shows the company’s founder, Jim Gordon (“There is no Taylor,” he declares), describing the firm’s phenomenal success. “We win at everything, especially business,” he says. As Gordon and other employees literally throw money around the office, Barkley and other members of the IT team bemoan how they have to “watch every cent.” CDW, they explain, helped them manage the company’s growth and networking. Later, as Barkley and others take a meeting in an elevator, one of the IT guys explains that CDW can help with mobility solutions, allowing meetings to take place in other arenas.

This year’s “Smart Growth” theme addresses the technological challenges (and solutions) that occur as a company gets bigger, says Dean Lamb, CDW’s director of integrated marketing. “The technology is evolving, and the challenges are evolving and we’re helping [companies] work through it,” Lamb tells Marketing Daily. “If you talk to a lot of people today at growing companies, they’re crunched for space. And we’re helping find solutions for that.”

To promote the idea, CDW has created a microsite, whatisthe7thman.com, which includes articles and information about how technology has changed the worlds of sports and business. Underscoring the idea of technology assisting in everyday activities, CDW will participate in a Reddit Q&A (sponsored by Biz Tech magazine) with sports technology and information company STATS. The topic will be how to use technology and the data it provides to better fill out NCAA tournament brackets. (The company will host another Reddit Q&A closer to the tournament’s final came, as well.)

“It’s interesting and fun,” Lamb says of the bracket tips, “but it’s also about how you can turn data into useful information.”

The television campaign will run during the March Madness television broadcasts on CBS, TNT, TBS and TruTV. Radio ads will run on ESPN Radio and Westwood One.