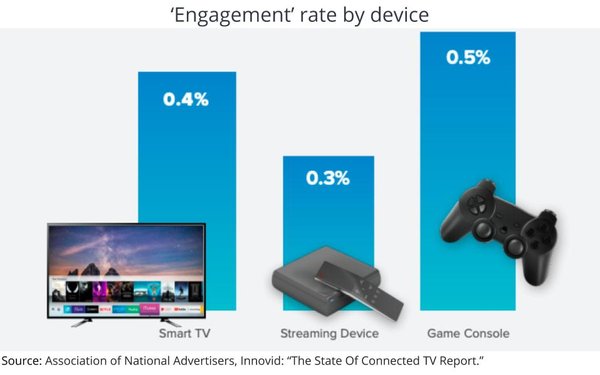 Although higher impressions come in prime time over-the-top/connected TV platforms/apps, better engagement with advertising on those platforms occurs in daytime hours -- between 9 a.m. and 3 p.m., according to "The State Of Connected TV Report" released today by the Association of National Advertisers and video marketplace company Innovid.

Prime-time impressions on OTT/CTV are between 4 million and 4.5 million during 7 p.m. and 11 p.m., according to the research. That amounts to 30% of all CTV impressions, compared to 23% during daytime hours.

But daytime engagement rates are three times the rates for prime time.

During one example offered, quick-service restaurants showed between 0.50% and 0.75% engagement during daytime hours, versus around 0.25% to 0.50% during prime time.

Researchers say that during prime time, viewers may be more apt to be in leanback mode versus the morning/afternoon, where they have work and/or tasks to be accomplished.

Innovid says that 32% of all video on its platform currently goes to CTV platforms -- a number that skyrockets to 73% if impressions are isolated to premium publishers.