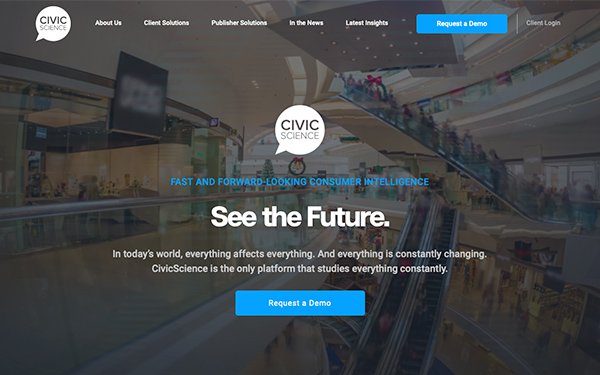 Lauretano -- a 20-year media and technology veteran -- spent time at OpenX, CNN, WSJ Digital Network, Gap, and most recently at Media.net, where he led efforts to launch and build a new business as senior vice president and general manager.

“We have a good name picked out for the new company, but we’re not yet ready to release the brand name,” Lauretano said.

The new company will run as a stand-alone subsidiary to CivicScience, known for its market research and immense database of consumer insights.

Not only does CivicScience ask consumers for deep insights related to emotions on topics like COVID-19, it also asks how they feel as parents.

But targeting also requires publishers to have first-party profile data, so they know age, gender, and income level, and pair that information with publishers’ first-party data.

“We’re not in the identity game to provide an identifier to publishers,” he said. “We’re here to enrich their profiles through data, so their own first-party identifier will give them a better understanding on how to target ads.”

Those ads range from search and social to programmatic display, television, connected TV, and other types of media.

“The execution of buys likely will be more programmatic, but the format of the advertising will vary,” he said, adding that he joined in July and now is building a team at the new company. Part of the platform has been built by CivicScience during the past six months.

Industry leaders and partners joining Lauretano include Jeff Wilke, former CEO of Worldwide Consumer at Amazon, and Thomas Tull, founder of Legendary Entertainment. The advertising brand will run alongside the company’s research operations, which initially got the company started.

Wilke backed CivicScience’s new digital ad business, taking part in a $15 million seed round, as the advertising industry goes through a major change that favors companies with direct relationships with the data owner. The company plans to tap into its first-party relationships to target ads without third-party cookies.

The new company, built on CivicScience’s market intelligence business, will leverage first-party, privacy-compliant data from more than 100 million survey respondents and relationships with hundreds of digital publishers and Fortune 500 advertisers who use the CivicScience platform.

“Since there are elements of first-party data without a dependence of third-party cookies, what we’re trying to do often times gets thrown into the bucket of identity and addressability, but I don’t view it that way,” Lauretano said. “No identity solution helps a publisher to enrich their own first-party data. They help them to execute on their first-party data. Doing it this way makes us unique.”