It's That Kind Of Thrill For Acura's TLX 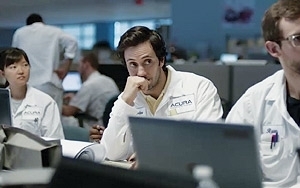 Yeah. It's that kind of thrill. Acura's replacement for the TL and TSX cars, the new TLX, is the subject of the automaker's biggest-ever ad campaign, launching this week.

The campaign, via Mullen, Acura's agency of record, kicks off with an anthem spot. Shot at Acura's R&D center, the ad comprises a series of snapshot scenes showing Honda engineers, researchers and drivers building, testing, failing, rebuilding and retesting, and celebrating the TLX. The backing track is Sid Vicious' version of "My Way." Then there are a series of 15 or so shorter spots from 15 seconds to 30 seconds for TV, digital and mobile platforms. There are also out-of-home, digital, social, CRM, dealership, and event elements, including a video road block on Facebook with TLX videos in early September.

The company will also promote via homepage takeovers on portals like Yahoo and MSN, and through social media “Thrillustrations” by New Yorker artists. Custom digital content on Slate, BusinessInsider and Car & Driver characterize the online ad buy.

Acura says the “My Way” anthem will run over more than 25 cable networks starting on Aug. 17, and the TLX will be integrated on ESPN’s SportsCenter with a month-long sponsorship of top college football highlights. The company will have the car onsite at The New Yorker Festival in October and the Sundance Institute NextFest film festival in Los Angeles this month.

Technology remains a core focus. Besides the engineering focus in the launch spot, other ads tout things like Siri Eyes Free voice-command capability, Precision All-Wheel Steer where the rear wheels actually turn slightly when one rotates the steering wheel. Mike Accavitti, SVP and general manager for Acura division said, however, that there is much more emotion now in Acura advertising. "There's an emotional element to every luxury brand. We do appeal to a more rational person, but we also want to dial up the emotional a little bit, but without alienating what we are all about."

Accavitti had, until early this year, overseen both Honda and Acura brand marketing. The company got wise and decided to give the latter its own business center — the Acura Business Planning Office — in the U.S., which accounts for 95% of global Acura sales, per Accavitti. Now he only has to worry about Acura, a change that took a long time to make as Honda is famously conservative, strategically. "We had been victim of our own success," he said, speaking to a small group of reporters at last week's campaign reveal. "But in the last couple of years we have been talking about the necessity to do something different. It will take some time to fully realize it, but we are starting to see benefits and dealers are jazzed up, and they get that we are standing behind the franchise."

The new structure gives Acura its own engineering and R&D teams, which may be one reason the engineers are the focus of the advertising. Accavitti says the key creative idea is that with TLX Acura engineers have made a car that they themselves are passionate about. He said the company actually talked to its engineers to get campaign ideas, partly because many of them had been working on the vehicle for five years. Engineers themselves expressed a "my way" sentiment about the car and its development, per Accavitti. "Engineers said 'we believe in these cars. And our mission is to create a car we would want for ourselves.' That's the message: that we are car enthusiasts, too."

The other visual narrative in the ads is that a good development process is not without mistakes. One shot shows the car hitting a cone on a handling test, and a test driver throwing his helmet on the ground. There are crash tests, drawings, and  midnight pizza arguments in conference rooms. "We all tend to take for granted the trials and tribulations that go into it. Along the way come failures," says Accavitti. "It's not all rainbows and flowers. We tried to capture what they really did."