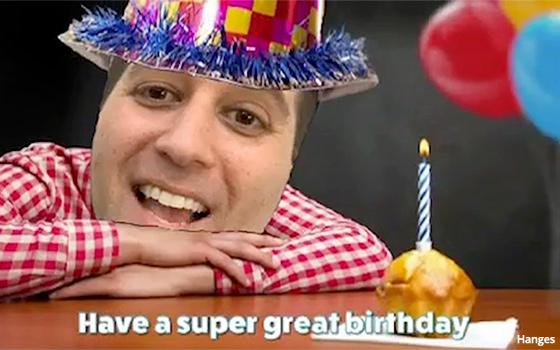 In fact, our survey of attendees showed that most of them took advantage of lower Facebook CPAs to beef up their spend there.

Not so for longtime e-card company JibJab. Remember the Presidential election of 2004, when its “This Land” satire made the company famous? It's still here, and with a robust pool of paying subscribers that relies considerably on Facebook paid and organic media. They are one of the few D2C brands I have found that are proud to have joined the Facebook July boycott. CEO Paul Hanges went one step further, as he tells us this week. What happens when a D2C brand goes FB-Free? Not pretty, but maybe not fatal.

MP: Who subscribes to e-cards?

Hanges: Our target audience is 35- to 55-year-old females with kids. We launched our app products, and the integration into the iMessage extension that has a download within our apps. We [also] focus on content that provides fun and utility. So you can say happy birthday, happy anniversary, happy holidays -- and even put yourself within music videos.

MP: You've extended into the iMessage format. So you've gone into text messaging as well?

Hanges: Absolutely. That's actually been a core tenet of JibJab. Part of the reason we think that we've lasted so long between economic boons and recessions is that we haven't wanted to be our own platform. Our whole thesis has been, how can we allow people to be fun no matter where they're communicating? And making it as easy as possible.

MP: Give us a sense of how large your customer base is.

Hanges: To date we have around 1.4 million people who subscribe to our products across all the different platforms.

MP: What's been the growth curve? Typically, how have you grown?

Hanges: We focus on a variety of methods. When someone sends a card, they're sending it to their friends and family and, intrinsically, by putting your face in it, it's going to automatically be appealing to your micro network. And we've been able to grow that way virally, people sending to 20 or 30 friends, and it's growing from there.

MP: We should make clear that JibJab’s fundamental technology inserts someone's own image into a card and that is the main draw for your product.

Hanges: In 2007, our new technology was revolutionary. Nowadays, when you see Snapchat Lenses or what everyone else is doing with AR, it seems rather elementary. But at the end of the day, people like the old-fashioned look of an oversized head with a floppy jaw in an animated card.

While people have wanted us to compete with some of those other products, we stayed to our core on what makes it fun and funny in our minds. You know exactly what you're looking at, and how it's done.

MP: What are the main channels that you use for acquiring customers and what are the successful techniques?

Hanges: Back in 2010, 2012, you relied heavily on that organic search and the virality of products. Today, we're receiving about 25% of our traffic or so through organic channels, email, touch points, direct brand recall, another 25% or so through Google search or Bing search and all the paid channels combined on search.

And then the last component of it is between 35% and 40% through Facebook channels, specifically, and their ad marketplace. And then the other 15% is made up of other avenues for testing, some TV advertising and other things on the affiliate and display side.

MP: You had a quarantine hit that found a way to address the crisis in a fun way.

Hanges: You're probably referencing our "My Quarantine Birthday" video where we produced an original song and original graphic and released it all in an eight-day span. Normally these types of cards can take up to two months to make. It's been our top-performing card throughout the last few months.

MP: A large share of your business comes through Facebook and that media buy. Most D2C brands admit they cannot afford to join the current big brand boycott of Facebook. It would gut their business. You've taken a different stance.

Hanges: We joined the Stop Hate for Profit Facebook ad boycott in July, to not only stop our Facebook ads but also our organic postings within it from the company. We did it mainly because we believe that the roots of [our] company are within satire and being able to poke fun at everybody.

While Facebook is not the only company that is causing this, we do think it's a situation that the company cannot put out that kind of political satire in the current environment. We wanted to put our money where our mouth is for the month of July.

MP: This represents a fair amount of your media spend, right?

Hanges: Yeah, and we have seen the impact. We're down 25% for the month of July.

MP: A lot of the brands that joined in were brand advertisers as opposed to performance advertisers that had a lot of alternatives. What alternative channels have you been leveraging?

Hanges: We've tried to diversify and test every single channel out there, but it's difficult. Not every channel works well for what we're doing. And it also doesn't align with our core demographics the way that Facebook and, to some degree, Instagram does. So we're using this time to learn attribution methods and what Facebook advertising actually drives so we can better understand the risk and see what other channels we could try.

MP: Bottom line, what are you missing when you turn Facebook off?

Hanges: We're learning that attribution modeling and attribution in general has a lot of crossover. Every single platform has different view and click windows. Someone who may see an ad on Facebook on a view side may do a Google search that clicks through on our paid ad side. So while Facebook makes up roughly 35% to 40% of our total subscriber count, we're only seeing like a 25% decline there, which shows that there's some crossover across all the channels.

One of the challenges that we've had is that we're almost always advertising on Facebook. So you can never do true attribution model and turn things on and off in a bunch of different channels. And this has provided us that opportunity to do so. We haven't seen as big of a hit as I would have expected in our branded search channel.

MP: How long are you prepared to go on with the boycott? Will you end it at the end of July?

Hanges: We're analyzing it. We do rely on this as our biggest channel. It's not something we can do permanently.

MP: Some emerging channels seem like they would be real naturals for your content: Snap, Tik Tok, Pinterest. What are you finding in these mobile channels?

Hanges: There's just something intrinsically different in the behavior of people from the Facebook platform by nature of what it is. Facebook has always said that it is more like a town hall and it's somewhere people go to talk together. But it's always been built within the platform that it's okay to go link, click out, come back and converse. You can see that that behavior is really what is good for D2C brands.

And that just doesn't exist in all these other platforms. So the biggest challenge for me is that when someone's going to Tik Tok, they're going to stay on that platform and to some degree that's the same thing on Snapchat. It's the same thing on Instagram Stories, which is why we see a lot more success within Facebook and the newsfeed than we do those other platforms.

That is the challenge for a business like ours. I'm most optimistic about things like Twitter and Pinterest because, again, when I look at what's the behavior of the customer, it's more in line with a Facebook audience member versus a Snapchat or a Tik Tok.

MP: Where is JibJab in using political satire? We're in a very different political space now than in the 2016 cycle. And maybe we've lost our sense of humor, except when we feel like it's doing damage to the other team.

Hanges: We want nothing else than to get back to our core, be able to poke fun. But we've seen things when we've launched different types of content within our platform just signify that we're not ready.

In 2016 we made a decision to only put out our short-form GIF content that had some Trump and some Hillary GIFs that anyone could use without any of that political satire we're known for. That seemed to work okay. It didn't get the same interest. Usage was down compared to other pieces of content.

Last year, we released a recycling video for free. And we thought it was really fun just telling people to put it in the blue bin, recycle when you can. And we got numerous complaints from all over that said, "I can't believe you're propagating global warming. That thing is not real." All the way to the other end of the spectrum, saying, "I can't believe you would tell anyone to use plastics. We need to eradicate it all completely."

We thought we were doing something that was completely fun. That solidified for me that we can't go any further in the political satire movement. That's why we decided to join the Facebook ad boycott.

MP: So, there's no way to simply do basic generalized satire.

Hanges: By no means does the company need political satire to continue on our mission of bringing joy and fun. But, man, it would certainly be nice if we could.