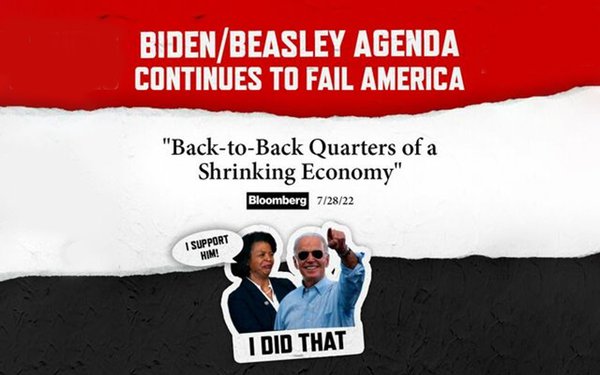 Senate candidates positioned themselves by addressing certain issues in ad campaigns during the run-up to the midterm elections, but the sentiments mostly used by Republicans and Democrats were negative, according to data released Thursday.

Ad messaging analyzed by CreativeX skewed heavily negative this election cycle, emphasizing what voters stood to lose if they chose the other side rather than what they could gain by voting for either party.

This time around, issues that are often part of regular political debates were largely absent from the ads including climate change and affirmative action.

Democrats positioned themselves as the party of working Americans capable of defending a woman’s right to choose. Overturning Roe v. Wade and retaining democracy remained major issues. Analysis of the messages in the ads by CreativeX revealed that 28% of Democratic ads mentioned the issue of abortion, versus 3% of Republican ads.

Republicans attacked the Democrats' record on inflation and the cost of living. They campaigned on the economy more frequently, and focused more heavily on Democratic economic failings by tying the party and Joe Biden to the issues associated with inflation and rising costs for families.

CreativeX analyzed more than 500 unique image and video ads from 14 swing-state candidates' official Facebook ads between September 1, and October 31, 2022. Data extracted from each ad identified patterns in how candidates used visuals to communicate positions and points of view.

The analysis focused on two types of creative data. Computer vision assessed the frequency of visual cues such as objects and themes.

Candidates were from eight Senate races deemed swing states -- five held by Democrats before the midterms, and three with a Republican being challenged.

The topics analyzed were key messages.

Republicans focused on Bernie Sanders, even more so than former President Trump. Sanders was present in 13% of all Republican ads, with Trump appeared in 11%. Sanders's inclusion primarily sought to associate him and the democrat running in the state, socialism and extreme left ideology.

Republican also focused on immigration and crime, with the topic of crime referenced in around 25% of all Republican ads analyzed. Of the Republican ads that mentioned crime, nearly 75% focused on the Democrats' perceived weaknesses on crime as opposed to drawing attention to their record of success.

Republicans campaigned on claims that Democrats had dismantled border protection, and in doing so opened the U.S. to a wave of crime, drugs, and human trafficking, thereby positioning themselves as the party capable of securing the US border.