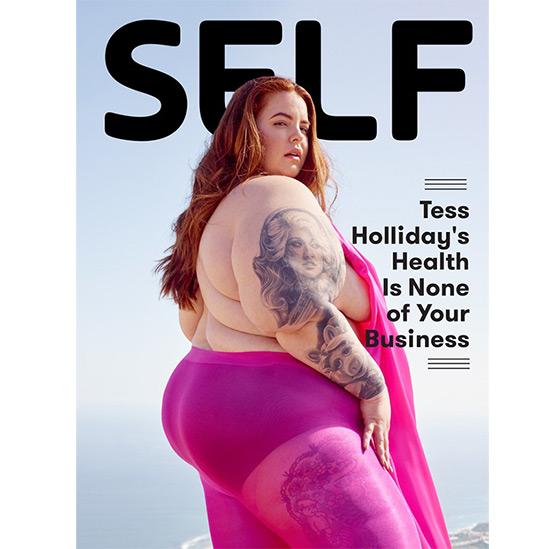 In 2016, Self magazine announced it would shutter its print publication and become a digitally produced magazine.

This week, the publication introduced The Health Issue, featuring plus-sized model Tess Holliday on its first digital cover. The issue offers a collection of stories about how people deal with their bodies and the stigmatizing power weight and size holds in American culture.

In her editor’s letter, editor in chief Carolyn Kylstra wrote: “The way we — the media, the general public, friends, family, doctors, hiring managers, strangers on the internet — think and talk about weight and health is broken.”

Over the past few years, the fashion and publishing industry has called for greater inclusivity, which includes seeing bodies not generally featured on the cover of consumer magazines.

Kylstra noted: “We chose to feature [Holliday] and give her a platform because she has insightful things to say about thriving in a world that devalues bodies of size. We also chose to feature her because size representation is necessary, especially for a national health media brand that can help guide the conversation about what it means to be healthy and how to make health accessible.”

Since the cover debuted, it has received wide acclaim across social media.

Self's cover story — “Tess Holliday’s Health Is None of Your Business” — has her in conversation with writer Ashley C. Ford, discussing mental health, accessible fashion and people who offer unwanted concern when it comes to plus-sized bodies and health.

Holliday recently published a memoir The Not So Subtle Art of Being a Fat Girl: Loving the Skin You’re In, and has long been a champion for celebrating different types of bodies.

Holliday wrote on her own Instagram page: "This is totally surreal to see a fat body on the cover of a health magazine. Thank you Self for changing the game with me."