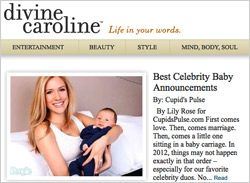 To give female viewers what they most desire, Meredith Corp. has secured a significant content distribution deal with CelebTV. Financial terms of the agreement were not disclosed.

Initially, CelebTV fare will be available on DivineCaroline.com. Yet according to J.R. McCabe, Meredith’s vice president and chief video officer, the company is already considering expanding the deal to include other Meredith digital sites.

Meredith currently offers thousands of digital videos across its portfolio of women’s sites on a variety of topics, including lifestyle, entertaining, cooking, home décor and healthy living.

In recent years, Meredith Corp. has been on a ravenous content binge. Earlier this year, the company finalized its acquisition of Allrecipes.com for a reported $175 million. The deal put Meredith first in comScore’s Food Community rankings and more than doubled the audience of its Women’s Network.