Conquering Ad Repetition: The Ad is Great, But How Many Times Can You Watch It?

As many of those participating in last week’s NewFront were reminded, one piece of good news over that past year was that, thanks to a combination of technological advancements and time on the hands of a quarantined public, streaming on OTT has seen stratospheric growth. For example, Tubi, an ad-supported streaming service that is a division of Fox Entertainment, reports that “similar to general OTT trends,” the service “saw a jump in viewership and time spent in 2020” that translated into almost a doubling of streaming hours and a 58% increase in viewership in just 12 months.

That Tubi’s experience is not unique is supported by a recent Nielsen survey, which indicated that, during the pandemic, streaming consumption “across all video options” was up more than 74% in 2020 over 2019. Americans in homes with streaming services spent as much as 25% of their time watching streaming video content. Fueling that, 25% of survey respondents said they had increased their video streaming subscriptions over the previous year. And zeroing in on just where audiences were finding that content, a survey by Deloitte reported that 50% of Americans said they were watching ad-supported video content (AVOD)—a figure that was 18% higher than in 2019.

For many advertisers, this enormous new audience represented an irresistible target.

“Audiences are generally willing and comfortable accepting ads in exchange for the free content, as long as they’re relevant. But that doesn’t mean they want to see those ads on repeat.”

The Scourge of Ad Repetition

But that’s where the bad news lies: Increasingly, the ads created for this audience, sent to the streaming services by multiple aggregators, have been wedged into ad pods without regard for the frequency with which each specific ad is shown. And that has resulted in a proliferation of ad redundancy, a situation that frustrates consumers and advertisers alike. AVOD consumers—who have agreed to view commercials in order to get free content—get irritated when the same ad runs over and over and, wondering why the network they’re watching can’t control the frequency, start thinking that perhaps another service will provide a better user experience. The advertisers find that repetitive viewing doesn’t increase the impact of their ads; if anything it undermines it by contributing to consumer annoyance. And given that most studies temper their enthusiasm for AVOD with the caution that consumers are only willing to subscribe to a certain number of services and are not intensely loyal to any one specific service, anything that undercuts the consumer experience needs to be taken seriously—and overcome. As Natalie Bastian, VP of marketing at Tubi, notes, “audiences are generally willing and comfortable accepting ads in exchange for the free content, as long as they’re relevant. But that doesn’t mean they want to see those ads on repeat. There’s a limit that can be reached. Protecting and improving the viewer experience is critical for us.”

Bastian points out that “brands are very rarely using one source to manage all of their investments.” Because of that, “network buys, direct buys, and partnerships, even on the device level, are all done in these siloed walls that may be able to avoid ad repetition on what they’re able to see. But there are other ads that are being transacted outside of those buys, and that’s when you start seeing households getting hit multiple times with a frequency that the advertiser does not want.”

Tubi, Bastian says, hears about the problems with ad repetition from its clients “all day long.”  Executives from both brands and major agency holding companies have said that controlling frequency is “one of their biggest pain points.”

The importance of controlling ad frequency is underscored by the fact that, as Bastian puts it, “brands and agencies are spending a significant amount of time developing buyer personas, learning from their behaviors, understanding what is going to move them along the funnel.” Ad repetition sabotages that effort with the very consumers those advertisers are trying to reach and, given the cost of running those ads repetitively, wastes money in the process.

Over the past year, Tubi, a San Francisco-based technology company that, with roots in ad tech, operates as both a publisher and an SSP, has developed a product to solve for excessive ad repetition, which Tubi calls Advanced Frequency Management.

The trick is finding the specific ads, regardless of which server is providing them, and blocking them before they end up in a streaming service’s ad pods and in front of the viewers’ eyes—in other words, as Tubi’s website describes it, “capping frequency at the campaign level regardless of the demand source.” Tubi’s Advanced Frequency Management, Bastian explains, starts with “visibility into the buy and the ability to see what creative an advertiser is running.” The technology transcodes an ad’s text and logos and then monitors bid requests with an eye out for the specific assets that identify the ad. “If the logos and texts show up,” she explains, “we can make a determination to either block the ad, because we know that those households already received it at the desired frequency for that time period, or serve the ad,” if repetition isn’t an issue. At the same time, Tubi can, as Bastian puts it “find incremental households that are the same target and demographic but that haven’t been exposed through these other channels.” And, of course, all of this is done instantaneously, programmed by humans but performed by technology.

One major retailer with which Tubi was working was simultaneously running its creative across 20 different partners, including Tubi, creating a situation that was ripe for ad repetition.  When Tubi overlaid its technology, Bastian explains, “we were able to see which households would have been hit multiple times, outside of our client’s cap, and block those impressions.” The result: a reduction of 99.6% in over-frequency, a blocking of 26 million unnecessary impressions, and an increased daily reach of 102,000 streamers—which meant the cost per unique reach was 19% more efficient than without the technology.

For the industry, especially in a time of increased viewing options and expanded audiences, excessive ad repetition remains a clear and growing problem. “It’s a real issue that both marketers and consumers recognize,” Bastian says. But the efforts to solve this problem, as exemplified by the experiences of marketers such as Tubi’s retail client, are promising—and have come a long way since Tubi introduced its product at last year’s NewFront. Next year’s NewFront should tell an even more definitive tale.

In the next installment of this two-part series, we’ll look at new ways to measure the impact OTT can have on a customer’s journey, from brand lift to sales, focusing on new integrations that Tubi introduced at last week’s NewFront. 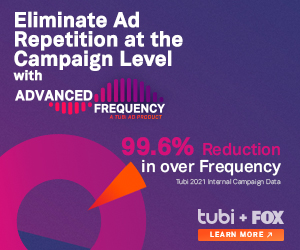