Beatlemania Will Return To CBS On Sunday Night 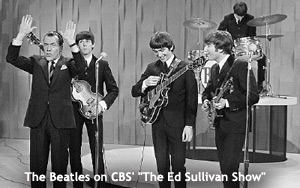 Sunday night at 8 p.m. -- exactly 50 years to the date and time that The Beatles made their legendary live appearance on “The Ed Sullivan Show” -- CBS will telecast the special “The Night That Changed America: A Grammy Salute to The Beatles.” It will include an interview with the two surviving members of the group, Paul McCartney and Ringo Starr, conducted by David Letterman in The Ed Sullivan Theater, the home of Sullivan’s show for most of its 23-season run (from 1948-71). The special will also feature appearances by contemporary artists including Alicia Keys, Katy Perry, Imagine Dragons and Dave Grohl.

“The Night That Changed America” serves as yet another example of a significant anniversary of a historic event being linked to CBS. Much of that credit goes to the long-time relationships the network enjoyed for so many decades with newsman Walter Cronkite and with Ed Sullivan, whose show repeatedly served as the primary prime-time platform for performers to gain their first significant exposure to a national audience.

This tribute is certainly something to look forward to, but it can’t compare to the impact of the actual event itself: The 50th anniversary of The Beatles’ first performance on American television. There have been countless extraordinary performances by musical artists on broadcast, basic- and pay-cable television in the decades since, and many of them have made huge news. But none of them virtually changed the country overnight, as the title of the tribute special suggests. That may sound like a whopping overstatement or an extreme exaggeration, but it’s true.

There had not been so forthright a display of young adult energy on national television since Elvis Presley appeared on the “Sullivan” show (twice) in 1956 and 1957, arguably the most famous performances by a musical artist on television until The Beatles came along. Presley was the first to infuse a televised performance with raw sexual power, at least as it was defined at the time, and from what I’ve heard about his appearances on “Sullivan” they proved as controversial as they were exciting. They literally left people all shook up, but they didn’t really change anything.

The February 1964 appearance by The Beatles was something else altogether. (I don’t clearly remember it, but I know I watched, because that’s what families did on Sunday nights at 8 p.m. Also, I will never forget the fuss that followed on television, on radio, in magazines and among older kids at school. I didn’t understand it, but still I took it all in, as children do.)

Interestingly, the Beatles’ performance on “Sullivan” was not the group’s first appearance on CBS. That came two and a half months earlier on November 22, 1963, with a profile on “The CBS Morning News with Mike Wallace.” It was quickly forgotten when news of President John F. Kennedy’s assassination broke just a few hours later. (Walter Cronkite repeated Wallace’s profile of The Beatles on “The CBS Evening News” in December.)

The Beatles on “Sullivan” signaled a new era not only in music but in all of popular culture -- one defined by youthful exuberance and passionate protest. It also gave Americans a collective lift after a prolonged period of grief following the murder of President Kennedy. Significantly, the Fab Four put all this across while wearing suits and at all times behaving in a manner that was relatively polite and respectful. The “older generation” of the day thought their “longish” hairstyles were unacceptable. The “younger generation,” by contrast, immediately began to let its hair grow.

This moment was the beginning of the youth-quake that would eventually change everything about life in this country. By the time the Seventies rolled around grown-ups were for the first time desperately trying to look and act and be thought of as much younger than they actually were. Advertising began to promote youthful, sexy imagery over what had been the more traditional focus on such old-fashioned concepts as home and family.

It was great seeing McCartney and Starr performing together on the recent Grammy Awards; it will be truly amazing to see them perform together again on this CBS special -- 50 years to the date and time that they first played on “Sullivan” with John Lennon and George Harrison. Their performances on the special were filmed in Los Angeles on the day after the Grammys. But Letterman’s interview with the two was conducted on February 4 in The Ed Sullivan Theater, so that will have to suffice. For his part, Letterman on his show tonight and tomorrow will present tributes to The Beatles.

In a touch of marketing genius, CBS this week dressed the marquee on The Ed Sullivan Theater to look exactly as it did on the night of February 9, 1964. It includes the names of other artists who appeared on the show that night, most of whom will not be recognized by passers-by.

tv
4 comments about "Beatlemania Will Return To CBS On Sunday Night".
Check to receive email when comments are posted.
Read more comments >
Next story loading