DDB San Francisco used OOH digital technology to demonstrate the benefits of energy conservation on behalf of Energy Upgrade California, while giving its client McDonald’s a plug for being green-minded as well.

Demonstrating that together we’re #BetterOff, the lights on a billboard with a McDonald’s ad in the Los Angeles area were turned off for a night, creating an alternative advertisement supporting the Energy Upgrade California initiative on top of the McD’s existing message.

To power the billboard at night a solar-powered glow-in-the-dark tape was used to illuminate the Energy Upgrade message, reminding people that big companies (like McDonald’s) and individuals alike can all take steps to conserve energy.

It was the first work for the agency created by Ben Wolan since he joined as executive creative director earlier this year.

The effort was timed to April Earth Day activities. 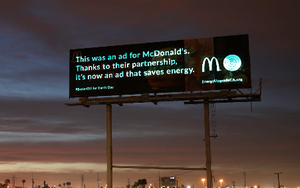