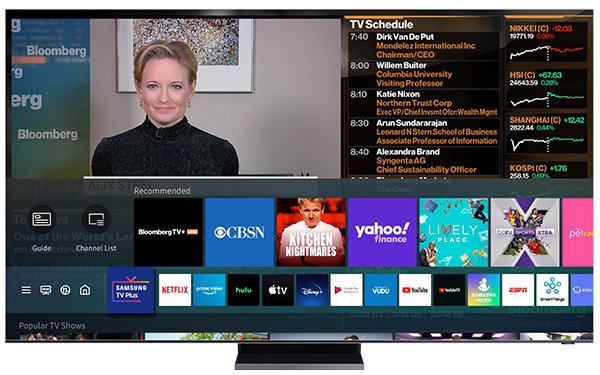 Bloomberg Media has teamed up with Samsung to deliver Bloomberg TV+ to viewers in full 4K ultra-high definition. The channel is available via Samsung TV Plus on smart TVs built between 2017-2000.

Bloomberg TV+, which launched in 2019, is the first channel to stream in 4K UHD on Samsung TV Plus.

“This is a milestone launch with a number of firsts for Samsung and Bloomberg Media,” stated Salek Brodsky, vice president of strategic partnerships and business development for Samsung Electronics. “Not only is Bloomberg TV+ the first 4K UHD channel to be offered on Samsung TV Plus, we’re the first platform to stream it in 4K UHD, and the first to offer it to millions of viewers beyond Bloomberg’s owned and operated channels.”

Shows appearing on the channel include weekday morning show “Bloomberg Surveillance” and “Bloomberg Wall Street,” in addition to interviews with newsmakers and business and global leaders discussing market trends, investments and technology.

Bloomberg TV+ appears on channel 1015 on Samsung TV Plus.