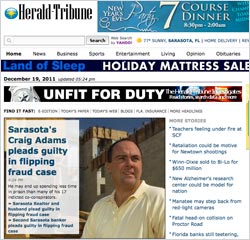 One of the nation’s largest newspaper publishers is about to get a little bit smaller, as the New York Times Co. revealed Monday that is in advanced discussions to sell its Regional Media Group, consisting of 16 local newspapers in Southern states and California, to Halifax Media Holdings.

The companies didn’t disclose a price for the deal.

The NYTCO Regional Media Group’s Florida newspapers include the Sarasota Herald-Tribune, The Ledger in Lakeland, TheStar-Banner in Ocala, The Gainesville Sun, and the News Chief in Winter Haven. Its California newspapers include The Press Democrat and the North Bay Business Journal in Santa Rosa. In North Carolina it owns the Star-News in Wilmington, among others.

The Regional Media Group newspapers boast a combined weekday circulation of over 400,000, but like the rest of the newspaper business, it has taken  hits in the last couple years. Total revenues declined from $497 million in 2006 to $277 million in 2010, a 44.3% drop in just four years.

While the rate of decline has slowed, losses continued into 2011. In the first nine months of the year, revenues at the Regional Media Group declined 6.7% to $190.5 million; that compares to an overall decline of 2.2% to $1.6 billion for NYTCO’s total revenues.

NYTCO has also said it would consider selling its New England Media Group, centered on The Boston Globe, and has received expressions of interest from a group of local investors, called the 2100 Trust, led by Aaron Kushner, an entrepreneur from Wellesley, MA, whose previous experience includes seven years as CEO of Marian Heath Greeting Cards.

To date, this has not resulted in a sale of the New England Media Group. Separately, in July of this year the NYTCO sold over half its stake in the Fenway Sports Group, which owns the Boston Red Sox, the prestigious Fenway Park venue and associated cable TV properties.