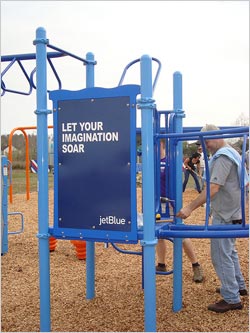 JetBlue Airways is inviting customers to vote on the next Kaboom playground location on the airline's Facebook page.

Those who vote will be entered for a chance to win a JetBlue Getaways vacation package.

Hundreds of volunteers from JetBlue Airways aided Kaboom last week in the building of a new playground in Long Beach, Calif. The JetBlue employees joined volunteers from the YMCA of Greater Long Beach and residents of the community.

"As the 12th playground built in our 12 years of service, this playground is a milestone in JetBlue's history and what better fit than our Long Beach focus city -- one of the first destinations in our network," said Icema Gibbs, JetBlue's director of corporate responsibility, in a release. “Creating safe spaces for our kids to play, in partnership with Kaboom, has been one of the cornerstones of our social responsibility efforts and one of the most satisfactory endeavors for our crewmembers."

The playground, for kids ages 5-12, is expected to improve community health, develop children's social skills and combat childhood obesity. Kids play harder and get more exercise when they play in an unstructured way, according to Kaboom.

The playground is the 12th built by Kaboom and JetBlue. The airline has helped to build playgrounds in cities including greater Boston; Salt Lake City; Kissimmee and Orlando, Fla.; and Long Island City, N.Y.

JetBlue partners with a variety of philanthropic and community-focused organizations, including Kaboom, DoSomething.org, The American Cancer Society and PBS KIDS. JetBlue has created a platform called Jetting to Green, which encourages environmentally friendly practices through education and volunteerism.