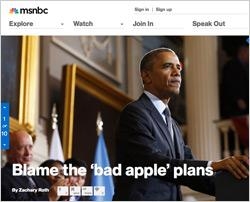 Along with a number of other traditional media brands, MSNBC was recently singled out for failing to sufficiently simplify its product offerings. Hoping to correct the issue, the wholly owned NBCUniversal unit has relaunched a sleeker, cleaner digital destination at msnbc.com.

Rather than bombard visitors with information, the site’s new home page singles 10 stories to present, which are accompanied by just four interactive tabs: “explore,” “watch,” “join in,” and “speak out.”

GE, the first native ad partner for msnbc.com, will collaborate with MSNBC to deliver a content series that highlights how the “Industrial Internet” and “Brilliant Machines Innovation” are reshaping our world.

America’s Natural Gas Alliance will be featured in sponsored polls in the “Speak Out” section of the site centered on natural gas facts.

In addition, msnbc.com’s vice president and executive editor Richard Wolffe has assembled a team of journalists whose original reporting is expected to shed light on the news of the day, as well as the key issues that are of top priority to the politically minded. The site also features enhanced show pages, which are designed to let users “interact” with MSNBC programs and hosts.

The site’s user experience is customizable; visitors can create their own news experiences. It also encourages users to comment on articles, polls, photos, and videos, as well as form groups and interact with one another.

As far as social integration goes, the new site allows users share stories, videos and infographics via other social networks. Plus, users can connect with each other by participating in “Watch Parties,” which pull in social streams from Facebook and twitter to the “Watch” section of the site.